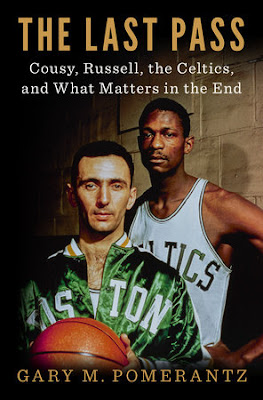 A case could be made that Bob Cousy might be the most underrated great player in basketball history at this point in time.

There are a few reasons for that. After an outstanding college career at Holy Cross, Cousy landed with the Boston Celtics in 1950. There he became one of the best players in the league, earning such nicknames as "Mr. Basketball" and "Houdini of the Hardwood." Cousy usually averaged a little less than 20 points per game and usually led the league in assists once he got the hang of the pro game. I would guess that he replaced George Mikan as the face of the NBA when Mikan retired.

But early in his career, he didn't win many games. Cousy played on some Celtics teams that weren't quite good enough. That changed in 1956, when a center named Bill Russell arrived. Russell was really, really good, and meshed well with Boston's fast-break offense. The Celtics won six titles in Cousy's final seven years. His retirement ceremony at the Boston Garden was one of the all-time great tear-fests as these go.

After one last title in 1963, Cousy went off to coach at Boston College. And the Celtics kept winning, and winning. Russell and his talented teammates won five more titles in six years, and everyone realized that the center was the biggest winner in team sports. It could be argued that he still has that title; there's a reason the MVP award of The NBA Finals is named for him. As for Cousy, basketball changed quickly over the years, and his stats such as shooting percentage don't hold up too well when put up to today's light.

But that's no reason to diminish Cousy in the process. He remains an interesting character today, and he's the centerpiece of Gary M. Pomerantz's book, "The Last Pass." In fact, he's the reason it works so well. Cousy obviously opened up his life to the author, doing more than 50 interviews and allowing Pomerantz to have access to all sorts of material - like letters to and from his late wife - for the book.

Cousy brought a little baggage with him when he arrived in the NBA. The New York City guard of French ancestry was an only child whose parents didn't get along too well. That can cause all sorts of problems, but he pointed his competitive drive toward the basketball court. He's was happy and comfortable with the ball, at his best if you will.

Cousy also arrived in pro basketball just as African Americans were arriving in the NBA. He quickly befriended the blacks on the Celtics, as the abuse and prejudice that they faced upset the New Yorker greatly. Cousy also was a flashy player when it wasn't popular. He tried to make the correct play at all times, but sometimes that play was an unorthodox one. If an African American had done some of those moves in the early 1950s, he would have been called a showboat and told to tone it down or be gone. Cousy could make it acceptable, and led the way for everyone else to add style to substance. Go watch some videos.

Then Russell came along, and there was never anyone like him. He eventually became the first black player in the Basketball Hall of Fame, and he was picked not because he was great statistically (although he was a great rebounder) but because he was a winner. Russell did it at a time when African Americans were demanding respect and rights in all areas of society, and was unwilling to back down on those aspects of life. That made him a legend on the court, but somewhat unpopular for those off the court who weren't ready to handle change.

Pomerantz has done a couple of fine books on days gone by, reviewing the Steelers of the 1970s and Wilt Chamberlain's 100-point game in 1962. This stacks up with them nicely, and may even be my favorite of the three.

Complaints about this book are minor. You obviously need to be receiving social security checks to remember Cousy well; I'm 62 and can barely picture him playing at Boston Garden when I was about seven. It's about my earliest basketball memory. The book also given a slightly vague sense of needing one more edit; some of the material is repeated at times.

No matter. "The Last Pass" works well because Cousy remains an interesting, even fascinating character - even past the age of 90. I'm underrated the book a little at four stars, and it certainly will be on my ten favorite reads of the year.

Be notified of new posts on this site via Twitter @WDX2BB.
Posted by Budd Bailey at 5:58 PM