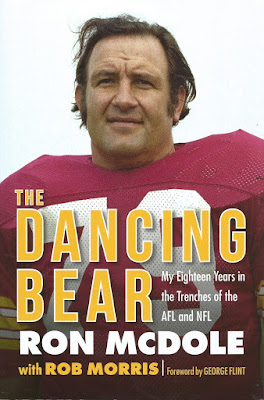 By Ron McDole with Rob Morris

You don't have to be a football fan from Buffalo or Washington to have heard of Ron McDole, but it really helps.

McDole remained relatively anonymous in those two cities over the course of an 18-year career in pro football, which was mostly spent in those two cities. He was, of course, good. You have to be good to stay in the game for that long.

In fact, the most memorable fact about McDole might be his nickname, "The Dancing Bear." It was given to him off the field by Sonny Jurgensen for his dance moves, but considering his size and quickness, it fit on the field too.

Therefore, when McDole finally decided to come out with a book on his football days, "The Dancing Bear" was the natural title.

McDole's type of story is of particular interest to fans of the American Football League in the 1960s. He came out of Nebraska as a defensive lineman, but bounced from the St. Louis Cardinals of the NFL to the Houston Oilers of the AFL. McDole suffered from migraine headaches, and it looked like that might drive him out of the league and into a career as a shop teacher.

Luckily for McDole, Bills' coach Lou Saban took a chance on his head and his heart and signed him. McDole became a regular on the Buffalo teams that won the AFC championship in 1964 and 1965. He might be the best player on those teams never to be inducted into the Greater Buffalo Sports Hall of Fame. The Bills fell apart after that stretch, and new coach John Rauch - best remembered in Buffalo as the guy who tried to use O.J. Simpson as something of a decoy - had McDole traded to the Redskins. The defensive lineman was 32. How long could he last? Owner Ralph Wilson was so upset that Rauch trashed McDole in a TV interview that he fired the coach and apologized personally to McDole for the deal.

McDole merely spent eight years as a Redskin. Most of them were with George Allen, where he was part of the "Over the Hill Gang." That team never won it all but came close, losing to the undefeated Dolphins team in Jan. 1973. McDole played through 1978, and retired instead of taking a contract with the Giants that would have meant playing past the age of 40. He still has the all-time record for most interceptions by a pro defensive lineman with 12. Dancing bear, indeed.

McDole comes across here as a nice enough fellow, rarely trashing anyone. It was a slightly less serious era in football, naturally, and his stories about the game in the Sixties and Seventies are quite funny and often interesting. But there are a few problems with the book, and it definitely will hurt your enjoyment of it.

First, it feels thin. There are several paragraphs of quotes from some of McDole's teammates about common experiences, and they feel like padding in some cases. Pat Fischer and McDole chat at length in an appendix, which is an unusual technique as these things go. They generally cover subjects that have been discussed earlier in the book. It feels like an attempt to get it to 200 pages; maybe some of that could have been filled with more about what McDole has been doing since 1978. Other than a few lines about charity work and thoughts on how the game has changed, this book could have been written about 38 years ago.

Second, it would have been nice to have someone give it one more read for editing purposes. Pat Fischer comes out Pat Fisher a few times; both are used in the same paragraph at one point. There are phrases like this: "Rayfield Wright of Dallas, who's in the Hall of Fame, was outstanding, but I had a lot of good games against him. He was an outstanding tackle." There are a handful of other sentences that don't make sense. And Sam Etcheverry comes out as Sam Estebury, among a few other typos.

Add it up, and it's tough to be too enthusiastic about "The Dancing Bear" (the book, not the person). Fans of the era will no doubt enjoy it, as they say. But others - especially outside of Buffalo and Washington - probably will come away with the feeling that it could have been better and lower this rating a bit.

Be notified of new posts on this site via Twitter @WDX2BB.
Posted by Budd Bailey at 9:59 AM