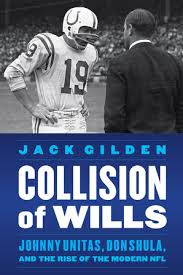 If you are making up a list of the most important people in pro football history, Johnny Unitas and Don Shula have to be on it.

Unitas held the mythical title of "greatest quarterback ever" for quite some time, as he took the position and in some ways the entire sport to new levels of brilliance during his great career. Shula merely has won more games than any NFL coach.

The pair were on the same side when they teamed up with the Baltimore Colts for a good chunk of the 1960s. But here's what was apparently whispered for years but not really discussed since those days, which saw the Colts win a ton of games but no championships: the pair never really got along.

That's the portion of Jack Gilden's book, "Collision of Wills," that will attract the most attention upon its release.

Shula usually took the high road in the relationship, merely pointing out that the combination won a lot of games. Unitas mostly kept quiet in public about Shula, but certainly he made it known to friends and associates that he had no use for the coach - a former teammate in Baltimore, no less.

Their dynamic drives the story along. In some ways, it's a relatively common tale. Unitas was an established star, the biggest name in football, when Shula arrived in 1963. Shula certainly wanted to do things his way, and was not shy about saying so. As the years went by, Unitas' career started to fall off - thanks in part to arm injuries that certainly weren't as diagnosed properly as they might have been now. The finish of the careers of such icons often ends badly, and Unitas turned out to be no exception. He lost his job as a regular and eventually was exiled to San Diego to end a magical run with a whimper.

Veteran football fans will find plenty to their liking here. The Colts were right in the middle of some of the best games in pro football history. That list includes the 1958 NFL championship game, which went to overtime as Unitas pulled a win out of his helmet, and Super Bowl III, the Jets' stunning upset of Colts when they were 17-point underdogs.

Gilden went out and talked to several key people in that era, and they add perspective on events. He also clearly did plenty of research into that era. Therefore, the games come back to life. It's great fun to read a detailed account of the time that halfback Tom Matte had to play quarterback in a playoff game for the Colts when Unitas and Gary Cuozzo were both hurt. Matte almost led the Colts to a huge win over the Green Bay Packers. Nothing like it has happened since.

There are a couple of small problems here that deserve a mention. It really helps to be old enough to remember most of the events from when they happened. In other words, the 20-somethings may not care too much about this and that's fine. It should be added, though, that Gilden carries the attitude throughout the book that the Sixties were the best time to be an NFL history, and he's not taking any arguments. I became a fan of the sport then too, but I'm not sure I'd go as far as the author does. You always remember your first loves.

There might have been room for another quick read on this. There's a little duplication in material along the way, and I'm still not sure why there's a chapter on David Halberstam. Gilden is a little unsure of himself when writing about the politics and culture of the decade.

But the football material is entertaining and can reel the football fan in nicely. Those who are looking for some new information on some legendary games and people - particularly those in Baltimore - will find "Collision of Wills" worthwhile.

Be notified of new posts on this site via Twitter @WDX2BB.
Posted by Budd Bailey at 10:17 AM