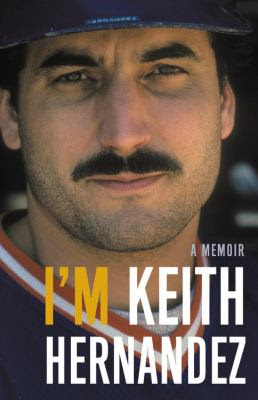 For a guy who has spent almost all of his life around a baseball field, Keith Hernandez is becoming a prolific writer.

He had written two books earlier in his life, "Pure Baseball" and "Shea Good-Bye." Now he's back with book number three, "I'm Keith Hernandez." And it sure looks like there is at least another one to come.

Hernandez's first book was a pitch-by-pitch breakdown of a typical game, and it was the best one of the three - especially for those who wanted to learn how the game was played. The second book was a day-by-day account of the New York Mets' last season in Shea Stadium. It came across as forgettable, particularly as that year moved further back in the rear-view mirror.

This new one, though, has a much more interesting approach than the last one. Hernandez, a former standout first baseman who now works as a commentator on the Mets' telecasts, starts off this one by saying he wanted to write a book that was different than other sports stories. Therefore, he concentrates on the period of his playing career between when he first signed with the Cardinals and when he "made it" by winning a share of the MVP award in 1979. (Hernandez and Willie Stargell tied in the voting.)

And that works quite well for the most part, mostly because of the fact that time has allowed Hernandez to be honest about his feelings in that era. We rarely notice, but very few people arrive in the major leagues of any sport fully formed - a Hall of Famer from Day One. Albert Pujols and Mike Trout might be the best examples of that in baseball in recent times. For mere mortals, those early years are filled with fits and starts. How the adjustments are made along the way determines how well a particular player's career might take shape.

Here's an example of someone who didn't adjust. A young hockey player came up to the NHL as a first-round draft choice. He didn't find instant success, and had a chat with a psychologist about how bad things were. The analyst pointed out that he was about 21 years old, making almost a million dollars a year. In the big picture, how bad could things be? The player admitted that the psychologist was right, even if it didn't feel like it. Too bad he never acted like he believed it, as he washed out of the sport after a brief, uneventful career.

In Hernandez's case, he tells about how the help of others often gave him a boost when he needed it most. It might come from a fellow player, telling him to adjust his swing in a particular way. It might be a coach or manager who expressed confidence that Hernandez was going to be a very good player in the very near future, and put him in the lineup every day. It's evident in the book just how appreciated the advice was.

Hernandez also scores some point by being painfully honest about his behavior in those years, especially the early ones in the majors. The temptations of sex, drugs and rock and roll were everywhere and obvious in that time period, and Hernandez dove into the pool at times.

You could argue that Hernandez makes one good-sized mistake in the literary sense here. The story more or less ping-pongs by chapter between the story of Hernandez's development as a player, and other areas. In the first part of the book, those "odd" chapters (as opposed to "even," I guess) are spent with stories of his youth. But later on, Hernandez moves into some odd areas, such as analytics or broadcasting. They may be interesting, but they feel like they are from another book - such as "Shea Goodbye."

Reading the reviews on Amazon.com are rather interesting. They read as if some people saw the cover, thought they'd be reading a great deal in an autobiography about the Mets of the mid-1980s, and were disappointed that stories about that era were nowhere to be found. So let's make the point again - this is not that book. You'll have to wait, apparently, for a review of his life as a New York ball player.

What we have, though, is pretty interesting. "I'm Keith Hernandez" reminds us there are few short cuts to success - it's a long route that few of us must take to get to the desired destination.

Be notified of new posts on this site via Twitter @WDX2BB.
Posted by Budd Bailey at 11:29 AM