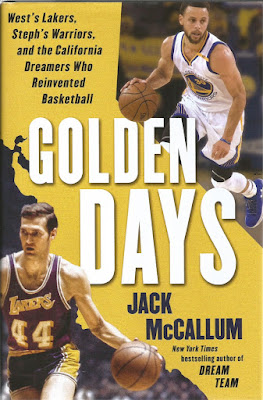 In one very important sense, this book has not dated at all since it was released late in 2017. The Golden State Warriors are the champions of the NBA.

The Warriors rolled past the Cleveland Cavaliers in the Finals once again in 2018. That's three championships in four years for Golden State. Therefore, a book that has the Warriors and the key personalities celebrating a title looks much the same as it did a year ago when it was written.

"Golden Days" is that book. And no matter when you read it, it's great fun to go through.

The format is an interesting one. Author Jack McCallum, who you might remember if you have been reading Sports Illustrated for a while, does his impression of describing a ping-pong game in the story. He flips between the story of the present-day Warriors and the 1971-72 Los Angeles Lakers.

You might remember those Lakers. Thanks to Wilt Chamberlain, Jerry West and Company, that team demolished the league in a season that included a record 33-game winning streak. It won the NBA championship relatively easily. Interestingly, it's a Laker team that got better when a Hall of Famer, Elgin Baylor, retired very early in the season. He was a replaced by a young player, Jim McMillian, was an improvement at the position compared to Baylor at their respective times in their careers. (Personal note: McMillian was one of my all-time favorites, and it's nice to read McCallum's praise of the forward's play here.)

There is a common denominator in the two teams, a fact that McCallum exploits nicely. West not only was a star as a player for the Lakers, but he was a consultant in the Warriors' front office during their run while in his 70s. In between he had a variety of roles, including general manager of the Lakers. There he put together some of the great teams in basketball history, and established a reputation as one of the sharpest minds in the game. West also is something of a tortured soul; he wrote at length about his life in "West on West," one of the most revealing sports autobiographies ever written. Admittedly, the '72 Lakers and '17 Warriors were very different teams without much in common, but they were both fun to watch when everything was working well - which is usually did.

McCallum obviously admired what that 71-72 Laker team did, and he happily goes back to talk to several of the principals on that team about what went so right. The winning streak gets the most coverage, as it reached a number that hasn't been approached in any of the four major sports in history. Don't hold your breath on that either.

But the Warriors get plenty of love and appreciation too. What they have done in the last few years has been revolutionary in its own way. Golden State was good before it had the chance Kevin Durant to its lineup in the summer of 2017. His addition created a little backlash with cries that the Warriors bent the rules a little to create a superteam, but you have to give them all credit for what they have accomplished. Durant, perhaps basketball's most pure scorer, did what he needed to do to fit in. The group is now two for two in championships.

Both Durant and Steph Curry are well explored. It's fascinating to read about Curry's game and what makes him so special - a list of traits that includes incredible range on his jump shot and a shooting release that is the fastest in basketball history. Steve Kerr also gets some credit for his team's success. Sportswriters always love talking to Kerr, who not only is smart and knows the game but is worldly and opinionated on things that have nothing to do with basketball. About the only drawback to this story is that it's difficult to make the tale of new ownership and front office actions too interesting, but they are probably necessary in telling how the Warriors went from irrelevant to the most charismatic professional sports team in the country.

Even with names like Chamberlain, Durant and Curry around, the star of the book is obviously West. McCallum obviously spent a great deal of time with "The Logo" during the book's research, and he remains an endlessly interesting person. West has always stayed in the present and not lived in the past, an easy trap for someone who was one of the game's best ever. You can tell that McCallum loved being around him for extended periods; they even watched Game Four of the 2017 Finals together, with West supplying analysis.

McCallum obviously loves his hoops, and its easy to become caught up in his enthusiasm for the game and its players. Yes, there will be some young adults that aren't interested in a team that won a title 20 years before they were born. But otherwise, this is almost as much fun to read as McCallum had writing it - and his sheer joy in "Golden Days" comes across in almost every page.

Be notified of new posts on this site via Twitter @WDX2BB.
Posted by Budd Bailey at 10:16 AM