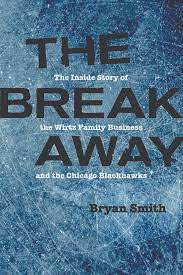 You don't have to be too old to remember when the Chicago Blackhawks of the National Hockey League were a bad team all the time. After all, it only dates back 11 years.

Back in 2007, the Blackhawks were quite dreary. They had missed the playoffs for the previous four years and in eight of the nine previous seasons. Attendance was awful, and apathy reigned supreme.

Contrast that to where the team is in 2018. OK, the Hawks missed the playoffs this year for the first time in a decade. But in between, they won three Stanley Cups - including a win in 2010 that ends a drought that stretched back to 1961. The building is full, and no one can complain about the state of the team for the time being ... at least too loudly.

What happened? It's a not-overly-long story. What's more, it's well told by Chicago writer Bryan Smith in his book, "The Breakaway."

This is a hockey story to some degree, and there are lessons here about the sports business and its management. But mostly, though, this is the story of a family called Wirtz. And it's quite a tale - a fellow named Shakespeare might feel right at home with it.

Arthur Wirtz had made a fortune in the depression and  bought the Blackhawks in 1946 when things weren't going so good for that franchise. He had some success with the team, and it had some stars such as Bobby Hull and Stan Mikita and won that Stanley Cup in 1981. When he died in 1983, son William - who had been involved with the team for many years - officially took over. Bill was a complicated figure, and he liked to do things his way for better or for worse. The team eventually slid into mediocrity as the game changed much more quickly than he did. For example, his was the last NHL team to televise home games. Bill valued loyalty over everything, but that didn't change the dynamics of the franchise.

It took his death to do that, and that came in 2007. Bill's will included instructions that son Rocky (shortly for Rockwell, a middle name) was to take over the team. That's in spite of the fact that father and son sometimes weren't on good terms either. And that move and other business decisions. that followed split the family part to the point where some of them only communicate through lawyers now.

One surprise followed another for Rocky when he took a look around the Blackhawks - although he wasn't shocked when fans booed during a moment of silence for his dad before a game. More disturbing was that the front office was in a shambles, and the team was losing something like $30 million per year. That sort of money was starting to take a toll on the whole financial empire.

Get the idea? Smith outlines the particulars nicely here, as Rocky was quite generous with his time in telling how the Blackhawks went from bums to champions in only three years. It's fun to read stories like the one about Rocky taking over his grandfather's office, which had been left more or less idle since Arthur died. Wirtz also allowed the author to interview several other people in the organization, which helps a lot. By the way, Rocky's brothers and sisters declined to comment for the book, perhaps not surprisingly under the circumstances.

Smith does point out that a couple of big pieces were in place for a recovery when Rocky Wirtz took control. Jonathan Toews and Patrick Kane were already part of the organization, and they were the centerpieces for a return to glory. Another piece was when John McDonough left the top position with the Chicago Cubs to take over the business side of the Blackhawks. While it took common sense to see some of the moves needed to revive the franchise, McDonough still got all of it done in an extremely short period of time.

"The Breakaway" isn't a particularly long book, and it's easy to get a little lost following the names of family members and the various business that were part of the Wirtz empire. But the hockey material ought to be very interesting to anyone who follows sports and its management relatively closely.

I'm fond of saying that sports teams lose for a reason. That's a point that is fully illustrated here, and the story of the team's turnaround is a worthwhile one.

Be notified of new posts on this site via Twitter @WDX2BB.
Posted by Budd Bailey at 8:34 PM