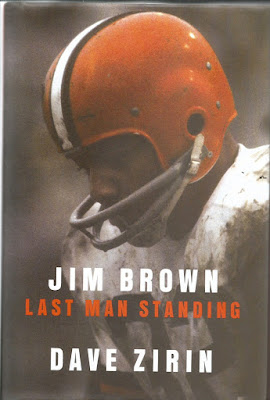 Jim Brown was and is a complicated man.

He's always done what he's wanted to do, knocking over obstacles along the way. Sometimes that's worked out well, and sometimes it's been a less than perfect situation for him and others. But he's always been a loud, articulate voice for his beliefs that commands attention.

Is it a surprise, then, that Dave Zirin's biography of Brown, "Jim Brown - Last Man Standing," is complicated to read? Probably not.

Let's start the discussion with Zirin, an interesting writer with a long string of credits. The first one is that he's a sports editor of The Nation Magazine, concentrating on the politics of sports. The writer also has published columns in "The Progressive." Zirin has written several books, and you can almost guess his orientation by reading the titles: "Game Over: How Politics Turned the Sports World Upside Down." "The John Carlos Story." "A People's History of Sports in the United States."

Before even opening the book, then, the reader knows that this will not concentrate on football games, and that Brown's actions will be mostly praised and defended in the pages to come. Check and check.

Brown was born in South Carolina but moved to Long Island as a child - where he became as good an athlete as that area - or perhaps any area - has ever seen. Brown didn't stop excelling once he got to Syracuse University. He was an outstanding football player who should have won the Heisman Trophy, but probably didn't because of racial prejudice. But as good as Brown was in football, he might have been a better lacrosse player. Mix a 6-foot-2, 230-pound mountain of a man with strength and speed, and you come close to athletic perfection.

Brown didn't skip a beat when he arrived in the NFL, arriving with the Cleveland Browns as the rookie of the year, and exiting as the league's most valuable player. And then he retired, still in his prime, walking away while he still could. Nobody did that then, but Brown was his own man.

Zirin divides Brown's life into several compartments from there, although sometimes the dots aren't fully connected. Chapters deal with Brown's involvement into the civil rights - this was a man who took a step back from fully endorsing Dr. Martin Luther King's efforts while endorsing Richard Nixon in 1968. Brown appeared in some movies and tried to produce others, but his career in Hollywood didn't go that far. Was that racism or lack of ability? Zirin seems to lean to the former, although it's certainly possible that it just wasn't a good fit.

Some years later, Brown turned his efforts toward improving lives in inner cities with his Amer-I-Can program. He certainly put time and his own money into that venture starting in 1988, and had some successes. Amer-I-Can is still in business, although it might not have had the impact that some expected - perhaps because of a lack of seed money from backers (private and public). Even Zirin has trouble fully defending Brown when it comes to treatment of women. The public figure has been involved in a number of incidents over the years, none of which has led to convictions. Still, there's a lot of smoke out there.

But Zirin's last point is a good one. Brown is past the age of 80, walks with a cane, and can't turn his head around, but he's still out there fighting for his beliefs. Whenever an issue meshes politics and sports, such as Colin Kaepernick's protests, Brown's phone still rings for reactions. His contemporaries - Muhammad Ali, Bill Russell, etc. - may not response for one reason or another, but Brown never ducks such issues.

This book could have used some end notes on who was interviewed and when. I assumed that anything that wasn't attributed to another source comes from Brown or another interview subject directly, although I shouldn't have to guess. It's also unusual to read a biography with such a particular point of view; history for me usually goes down easier when the story is presented from a step back for perspective's sake.

Brown continues to fascinate us, commanding attention as the clock counts down. "Jim Brown" presents a good-sized if somewhat one-sided portrait of a man who will be remembered for more than carrying a football as a young man - someone who became an imperfect but interesting adult for more than half a century. Those with an interest in him will find plenty to think about here.

Be notified of new posts on this site via Twitter @WDX2BB.
Posted by Budd Bailey at 6:04 PM