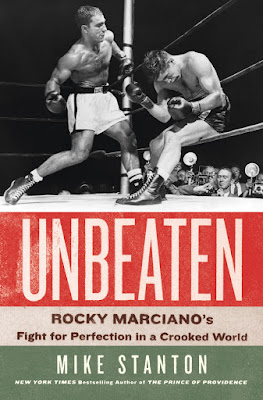 This one is personal.

Brockton, Massachusetts, is a small city in the southeast part of the state. Once upon a time it was one of the shoe manufacturing centers of the United States, with millions of pairs produced per year. The work was tough and difficult in some cases, but it was also honest and put food on the table for thousands. That led to a better life for a lot of people, and a better future for their children.

There wasn't a lot of glamour attached to Brockton back in the day, before the shoe business dried up. But in the late 1940s and 1950s it had Rocky Marciano, and that was something.

Marciano fought his way to the heavyweight championship, when that title meant almost everything in sports. He finished his career unbeaten at 49-0, something no heavyweight has ever done. Marciano put Brockton on the map, no small task.

While I'd like to think that my parents and grandparents were the Favorite Sons and Daughters of Brockton, since they are natives of the place, reality puts Marciano as the champion in that category. I spent roughly the first six years of my life there (late 1950s), and went back frequently for visits. It was difficult not to hear stories about Marciano from relatives and friends. Even today, it's tough not to see evidence of his life - such as the monument just outside the stadium that's name after him.

Let me assure you, then, that Mike Stanton gets just about everything right in his thorough book on Marciano's life, "Unbeaten."

Stanton really captures what Brockton was like, particularly for those immigrant families who came there looking for that better life. Rocky Marciano (real name - Rocco Francis Marchegiano) was born in 1923, and thus became aware of life right about the time the Depression started. For the record, my father was born about six months later and didn't really have any memories of Rocky in high school even though they were in the same building for a while. Rocky dropped out along the way.

After Marciano was kicked out of the military, you might have picked him as the longest of long shots to be famous. He wasn't well educated, and manual labor of some sort seemed like his best option in life. But he was a good athlete, and he was dedicated and determined. Although Marciano wasn't a bad catcher, boxing was a much better fit. By Stanton's description, Rocky was incredibly raw - but he was very strong and wanted to learn.

The wins started to pile up, and eventually he climbed the ladder into the heavyweight rankings. There was a vacuum created by the retirement of Joe Louis from the boxing scene, and there wasn't much talent to replace him - until Marciano walked in. He knocked out Joe Walcott in an epic bout to win the championship, and kept it through the time he retired 1955. Rocky didn't fight very often as champion, partly because of the tax laws of the time, and he didn't have that many great opponents. But he showed up every night, punched in, did his job, got the win, and went home. Residents of Brockton used to bet as much money as they could on the Native Son, collect the winnings, and have a party. My parents used to drive from Philadelphia to Brockton on fight nights, just so they could join in the inevitable celebration. The book tells how people bought cars and houses with those winnings.

The fights are carefully reviewed, one after another. Stanton must have sore eyes from reading microfilm and watching YouTube. But he really does justice to a couple of other areas in Marciano's life that deserved investigation.

The first centers on the sport of boxing in the 1950s, which was - by any standard - a mess. Fixed fights were relatively common, and organized crime played a role in the sport. There are no signs that Marciano had pre-planned outcomes in his fights. However, his de facto manager, Al Weill, was also the matchmaker for the International Boxing Club, which essentially ran the sport during the 1950s. Marciano discovered Weill was skimming some money off the top of purses for his own benefit, and that may have helped drive him into retirement. On the other hand, the boxer probably benefited from having a, um, well-connected business partner in terms of his career.

Then after retirement, Stanton refers to Marciano as "America's Guest," someone who never paid for anything if he could help it. (By the way, my grandmother told me stories about how Rocky's mother didn't like opening her purse either, throwing off lines like "Don't you know who I am? I'm the Champ's Mother.") The Depression and the dishonest manager left a few scars in that area. I guess. Marciano may have been America's worst money manager during the remaining years of his life, hoarding cash when possible and hiding it in all sorts of places. When he died in an airplane crash, the locations of those bankrolls went with him.

It's tough to know how good Marciano was. He was small for a heavyweight by today's standards, checking in at under 190 pounds. Marciano came along at a bad time for talent. But he could throw and take a punch, and rarely took a step back. Maybe he's Joe Frazier with a better chin. And he beat everyone was put in front of him, and nobody else has ever done that.

Marciano, then, certainly deserves a first-class biography, and this is that. Take it from another grandson of Brockton - "Unbeaten" brings an interesting if complicated era back to life.