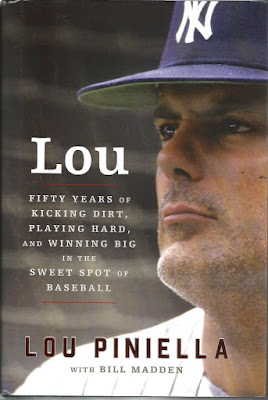 By Lou Piniella with Bill Madden

When I first got a look at Lou Piniella in person, he was a young prospect in the Baltimore Orioles' farm system. The outfielder was OK as a Double-A player in Elmira, New York, but not someone that could be projected into a long baseball career.

Boy, was that wrong.

Piniella made it to the major leagues for good in 1969, winning Rookie of the Year honors with the Kansas City Royals. He stayed in the game through the early 2010s, so he had a half-century of involvement with the game at its highest level. (For the record, Elmira followed him like a favorite son every step of the way.)

A guy like that should write a book, especially if he has a strong New York connection (sales and all that), and Piniella finally got around to it in 2017. The result is "Lou." Not surprisingly, the cover photo has Lou in a Yankee hat - he became relatively famous wearing pinstripes.

It's easy to think that Piniella beat some long odds to have the life he did. He wasn't a great prospect coming out of the Tampa area, but he did sign a pro contract. Piniella worked hard but did some bouncing around along the way. After some decent but not overwhelming years in Kansas City, Piniella was traded to the Yankees... and the fun began.

The Yankees of the late 1970s and early 1980s had some stars, but they also had some grinding players who seemed dangerous when it mattered most. Ask the Boston Red Sox, who might have had a happier ending to the 1978 had Piniella not displayed some unexpected defensive skills in the playoff game with New York.

Piniella had a front-row seat to the "Bronx Zoo" days of the Yankees in that era, and he naturally has some stories about Billy Martin, George Steinbrenner and Reggie Jackson. Those years have been covered elsewhere in other books. Come to think of it, co-author Bill Madden - the fine Daily News writer - has worked on several of those books. It still amazing that the "win first, argue later" approach of those Yankee teams worked so well.

Those stories of turmoil continued into the 1980s, as Piniella eventually turned into a Yankee executive. He got a chance at managing but couldn't quite get New York over the finish line, and eventually decided to go elsewhere. That came with some heartache, according to this book, but it probably was for the best for all concerned.

The rest of Piniella's story might be the most interesting to some fans, simply because it hasn't really been told. He landed in Cincinnati, where he led the Reds to one of the great upsets in World Series history by beating the mighty Oakland Athletics. From there it was on to Seattle, where he had the chance to manage Ken Griffey Jr., Alex Rodriguez, Randy Johnson and Ichiro Suzuki. Then Piniella was on to Tampa Bay, where he was hamstrung by finances, and Chicago (Cubs), which went through an assortment of ownership groups while he was managing - a recipe for problems.

For a guy who is best remembered for throwing bases around while arguing with umpires, Piniella comes off as rather calm here. He says religion helped him reach that state, and he probably mellowed a bit with age. Piniella also seems quite affected by the fact that three of his closest friends in baseball - Thurman Munson, Jim Hunter and Bobby Murcer - all died at a young age.

No matter what the reason, he's a little embarrassed by a few of his actions in hindsight. Piniella also gets some help along the way here, as people like Griffey and Rodriguez contribute their stories a few times. I'm not a great fan of that technique, but it works pretty well here.

It's difficult to have a strong reaction to "Piniella." It was an interesting baseball life, and the seasons do go by quickly. But the book may not be called fascinating or filled with bombshells. Let's just say, then, that this autobiography is worth your time, and will get an extra star from Yankee fans.

Be notified of new posts on this site via Twitter @WDX2BB.
Posted by Budd Bailey at 2:13 PM