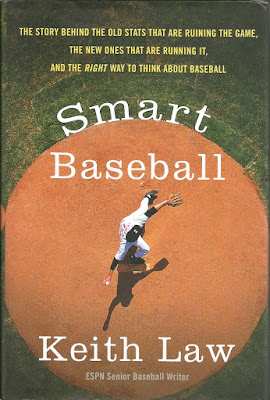 "Smart Baseball" is sort of like a college textbook, except for the fact that there aren't many classes in most universities on baseball analysis.

Translation: For the most part, it gets a bit more difficult to read as you go along.

Even so, you'll probably come out a bit smarter once you are done reading it.

Keith Law is the professor of sorts for the book, and he's well qualified to lead the discussion. Law is a former writer for Baseball Prospectus. He worked in the front office of the Blue Jays for a while - heck, he was the entire analytics department - before moving on to ESPN. Law's columns there have been smart and interesting.

In his first book, Law takes us through the revolution in baseball statistics. If you've been paying attention for the last several years, you know that all sorts of different numbers are now "out there." Suddenly such terms of "spin rate" and "launch velocity" are popping up on television broadcasts.

This book is divided into three sections. Part One is going to be the most interesting for most readers. Here Law goes through some common statistics that pop up in baseball, and shows why they aren't too useful. Batting average doesn't account for walks, pitching wins has too many external factors influencing them, saves hardly tell the story of relief pitching, fielding percentage scratches at the surface of telling how good a particular player is, and RBIs are skewed toward good teams because they generate more opportunities (in other words, a good player on a bad team won't drive home many runners, because there are fewer runners to drive in). It's all very logical and well done.

From there, we move into the new wave of baseball numbers, relatively speaking. On-base percentage has been around for quite a while, but no one seemed to pay attention to it until, oh, maybe 15-20 years ago. From there, we get into such numbers as slugging percentage and OPS, Fielding Independent Pitching and Win Probability Added, and UZR/dRS fielding ratings. I'm not going to tell you I understood some of them too well, because I didn't.

Luckily, things get a little easier in Part Three. Law looks at Hall of Fame debates through the new numbers, tells what a scout does in this new age, and opens a door to a vast data-collection project in Major League Baseball that will be a huge tool for further analysis. You'll come away thinking, why is Jack Morris on the inside of the Hall of Fame and Lou Whitaker on the outside?

Law is a good teacher, and he explains this stuff well. Still, it's easy to wonder if we've gotten to the point where we're leaving some people behind. Some of these statistical tools are great for evaluation over the long haul, and teams can use them to try improve their rosters. But fielding zone ratings aren't going to pop up on scoreboards during your next visit to the baseball park. Yes, the game can be enjoyed at all sorts of levels, but sometimes the discussions here can be more centered on the long term than short term. If I'm watching a game featuring a starting pitcher with an ERA of 3.00, I have a rough idea that he's pretty good. The team may want more information than that, but I'm quite satisfied with that much data while I'm having a hot dog and drink.

The Revolution really is here, and "Smart Baseball" will help you understand what's happening. But if you prefer to stay "blissfully ignorant" of the new statistical tools used at the game's highest level, that's fine too - there's room enough for everyone. And it's not like batting average and RBIs will disappear anytime soon.