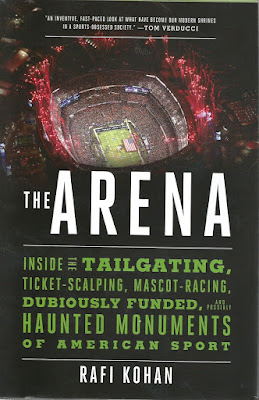 Arenas and stadiums fill an interesting role in our society. They bring people with a common interest together. What else does that?

What's more, when people walk through the gates, they anticipate having a good time. It might be a sporting event, or a concert, or some other function, but there's always a chance they'll have a memory that will last for a lifetime.

Rafi Kohan decided to take a good-sized look at the subject - and perhaps he discovered along the way just how good-sized a book like this needed to be. He explores a variety of issues dealing with our arenas and stadiums in "The Arena," and does it with a good combination of smarts and good humor.

Obviously, some of the subjects could have been turned into books on their own. The most obvious in that category is what's involved in building the arena or stadium in the first place. Hundreds of millions of dollars go into construction of our sports palaces, and quite a bit of comes from public sources.

Is it a good investment? Economists and certain activists will tell you no, that it doesn't generate that much money for those who could use it - instead benefiting owners and players, who are usually doing pretty well as it is. Maybe that money should be going to where it is needed more, or where it might have a larger direct impact. You can do a lot with a billion dollars. On the other hand, such facilities do improve the quality of life in a particular area, and serve as free advertising for a community. That can help lure new people and industries to town. We do need and enjoy our gathering places.

After getting through the areas of building new structures and maintaining old ones (Lambeau Field in Green Bay, Wrigley Field in Chicago), Kohan moves on to a variety of related subjects. Some work better than others. The ticket-scalping business has changed over the years, as their resale has become legal and in some cases encouraged if done through approved sources. The story is a little on the confusing side. The Superdome's role in Hurricane Katrina is quite a tale, as you probably know, but it's tough to say if it fits into this book smoothly.

But about a third of the way through, Kohan moves into areas that are more suited for this format. What's involved with maintaining fields in baseball and football? What do teams do about bad fan behavior? What did the Jerry Sandusky scandal do to the bonds that tied Penn State fans together? What's involved in trying to make sure that fans have fun at a game, win or lose? What's involved in keeping the place tidy, or changing it around from event (hockey game) to concert hall?

The last two chapters are particularly thought-provoking. Our professional sports teams have embraced the military in recent years, with reunions and introductions and discounts, and so forth. The armed forces are popular, and teams no doubt think it is good to link themselves with patriotism. But there are many forms of patriotism and service to the country, and those other versions are usually ignored at our games. Kohan doesn't spent long on this area, but you'll certain think about it the next time there is a brief ceremony at your next game.

The author concludes with a visit to the Silverdome, which hosted many events including the Super Bowl during its relatively short lifespan. Eventually it was allowed to sit and crumble, becoming a symbol for the issues of decay that struck parts of the Midwest in recent years. But every city faces such decisions concerning our public facilities, and the sports versions' span of usefulness seems to be shrinking by the day. I might have been tempted to open the book with the story of the Cowboys' stadium and end it with the Silverdome, if only because the contrast would be so dramatic. But, that's just me.

As a book, "The Arena" is not going to be for every taste. The first part takes some concentration to read, and the chapters are long. But it gains momentum from there, and became a good look at some areas that don't get much examination on a regular basis. If you spend more than a couple of times a year in such facilities, you'll enjoy this.

Be notified of new posts on this site via Twitter @WDX2BB.
Posted by Budd Bailey at 11:52 AM