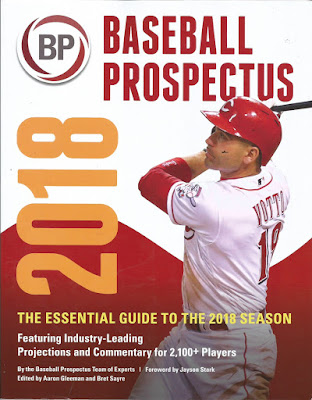 Then there are books. Every fall, I order the latest Best American Sports Writing book. And every late spring, I get Baseball Prospectus. This year's copy of the latter just arrived in time for the start of spring training, and after finishing it I'm ready for exhibition games to begin.

I'm sure the staff of Baseball Prospectus, which also has a website, exhales a bit when the book comes out. There's a ton of work that must go into this, even in the age of computers, and it's remarkable that it comes out so quickly. No, J.D. Martinez isn't listed with the Red Sox, but the staff worked hard to get it as up to date as possible.

What's old? The format, for those who have never picked it up, remains the same. Every team gets a chapter of about 16-18 pages. The first three pages have an essay of some sort, surrounded by some charts and graphs about a few standard areas (farm system rankings, park dimensions, etc.) Then we're off on a review of every significant player in the organization. They are roughly laid out four to a page, so each player gets a good-sized paragraph and a long stat line. I should mention that, as usual, the type goes all the way across the 8.5-inch page, which can be a little daunting after a while. The layout does allow more information to be printed, though. After more than 500 pages of such team breakdowns, the back end is highlighted by a list of the top prospects in the game and an index.

The usual precaution - don't feel as if you have to read every player description. I usually skip over the minor league players from teams other than my personal favorites. But you're free to go back to it during the course of the season if something of interest comes up.

What's new? The most obvious addition is that players from leagues in Japan and South Korea have gotten the Baseball Prospectus "treatment" this year. It's impressive that the information has been collected, although I'm not sure how many readers will plow through it. Many American readers probably will wait until a player is poised to jump over the ocean for baseball employments. But it's there if you need it.

Baseball Prospectus first caught my attention because of its writing style. The various authors, and there are bunches of them, always have been given wide latitude to come up with fun and different ways of coming up with descriptions of players. That's not easy to do, and my unscientific viewpoint is that fewer people approached it this year in such a way as opposed to past years' books.

Overall, it felt as if this year's ratings were more serious. That cut down my enjoyment level of the 2018 edition by a shade. It seemed like every middle reliever in organized baseball - and there are a bunch of them - gets the same sort of review. However, there are exceptions. The writers of the Texas Rangers were the best example of that. Others may disagree that the attempts at humor work, but there's a lot of material to go through - let's have some giggles along the way.

Most of the complaints on Amazon.com this year center on the fact that the price on the Kindle edition of the book went up by quite a bit. I don't buy many books that way, but the list price is the print edition did go up a couple of dollars. That happens, but it's still worth the purchase price.

After finishing the 2018 edition, you'll feel ready for the upcoming season to start - even if all of the free agents haven't signed yet. Then keep Baseball Prospectus 2018 handy for when you watch a game on television during the upcoming season.

Be notified of new posts on this site via Twitter @WDX2BB.
Posted by Budd Bailey at 10:18 AM