By Felipe Alou with Peter Kerasotis 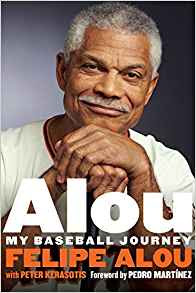 The name "Alou" isn't quite specific when it comes to a baseball book.

Which one is it about? Felipe Alou, who was a very solid player throughout the 1960s and then became a successful manager? How about his brother Matty, merely a former batting champion? Or another brother Jesus, who had a good-sized career too? Finally, there's Moises, Felipe's son who had several fine seasons in the majors.

The answer of the question, if you didn't look at the byline or the photo, is Felipe. He's come out with his second autobiography, "Alou." The first one was written back in the 1960s, so it's fair to say this baseball lifer has an update coming to him.

Let's get one point straight here. Felipe's mother had a maiden name of Alou, while his father was a Rojas. The mother's name came last in the Dominican Republic, where the family resided, so Felipe was an Alou as a baseball player. A relative, Mel Rojas, avoided that little problem, and eventually was a pitcher on one of Felipe's managed teams in Montreal.

You might not think of Felipe Alou as a pioneer, but he truly fits that description. Alou was one of the the first major league players to come from Latin America, which is quite an achievement. Adding to the luster of that statement was that he grew up quite poor in a small town in the D.R. The living space was about the size of a typical bedroom by American standards, and some of it had a dirt floor. There wasn't much money for fun and games, so Felipe had to improvise. He was good at the baseball part of it, but thought he would become a doctor. However, when the Giants waved a little bonus money at him, the family could not afford to turn it down.

The best part of the book concerns Alou's struggles in the early years of his career. He was first sent to Louisiana, where in the late 1950s it was more important to segregate the team than it was to win. Alou was sent to Florida from there, and took out his frustrations on opposing batters. Baseball readers know the drill - separate houses, less-than-equal opportunity to play, etc. But it still hurts to read such material, even from a distance of 60 years.

Alou had more such problems once he got to San Francisco. Manager Bill Rigney never gave him a chance either. When Alou looked around the Giants' roster, he saw it overflowing with talent in the early 1960s. Orlando Cepeda and Willie McCovey were just coming into their own, and Alou's brothers were following him to the majors as well. Oh, some guy named Willie Mays was patrolling center field, and it's fair to say no one was going to get playing time at his expense.

Somebody had to go, and Felipe went to Milwaukee - which eventually headed to Atlanta. Alou was good there too, as he received some MVP votes and was a part of some good but not Braves teams. Injuries eventually slowed him down to the point where he bounced around a few teams and retired in the mid-1970s. Some of the statistical comparisons are made to rank him with Amos Otis, Chet Lemon and Dusty Baker, and those work pretty well.

Even so, he never would have had a second book had his baseball career not had a second act. Alou worked his way up the ladder as a minor league manager and major league coach. Just when you thought he'd be out of chances, he landed the Montreal Expos' job in 1992. There he guided the most unlucky team in history by some standards. The Expos of 1994 were a great squad, apparently headed for a championship when labor troubles stopped the season in early August. There was no World Series that year, no chance to prove how good the team was. Montreal broke up the squad over the winter, leaving us wondering. Alou is wondering himself - that team might still be in Montreal had it not been for that labor dispute.

Alou managed the Expos through 2001, took a year off, and went back to the Giants as skipper at the age of 68 in 2003. The Giants had two good years and two bad ones, and finally he was done. Here he has some stories about some of his players, such as Pedro Martinez and Barry Bonds. You can tell that he earned the respect of his players, treating them like men but was no pushover. In a different set of circumstances, Alou probably is in the Hall of Fame - but he had to play the hand he was dealt.

Those circumstances will prevent some casual baseball fans in America from reading this. There aren't many stories of great triumphs. Still, "Alou" ought to be a big hit in baseball-crazed sections of Latin America. He has an inspirational story to present, and he has tales of such Latin baseball heroes as Roberto Clemente and Juan Marichal - not to mention the rest of the family - as well. Those who specialize in Latin baseball or in Expos history should give this an extra star. But it's a comfortable read for the rest of us.

Be notified of new posts on this site via Twitter @WDX2BB.
Posted by Budd Bailey at 2:03 PM