Review: Sometimes You Have to Cross When It Says Don't Walk (2017) 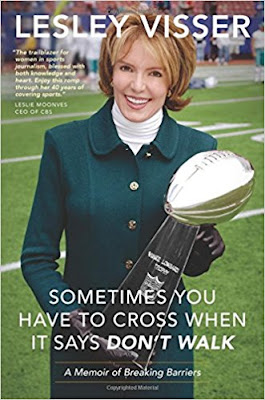 My instant reaction to the professional work of Lesley Visser is a little different than that of others - perhaps because I'm a former newspaper reporter.

I remember her when she first started in the the business as a member of the sports staff of the Boston Globe in the 1970s. That was one of the greatest collections of talent in newspaper history, and Visser more than held her own. Yes, she was one of the pioneers of the business at the time, but she clearly knew her stuff and wrote well.

It might have been interesting to see what she might have done had she stayed in that role. Instead, she jumped to television, where she was a pioneer too. Broadcast journalism requires a different set of skills, of course, and she did well there. What would have her life looked like if she had stayed with it? Tough to say. Maybe she would have knocked down some different doors.

In reading "Sometimes You Have to Cross When It Says Don't Walk," it's obvious that the move was a career-changing experience, and that she enjoyed herself along the way.

Sports more or less have been a part of Visser's life almost from the beginning. She landed a job with the Globe out of Boston College in the 1970s, a time when women weren't exactly welcomed by players and teams. The title refers to her mother's reaction to her becoming a sports journalist when it figured to be a difficult battle to get through the door.

Visser's best stories in the book concern the battle to gain access. Picture someone waiting outside a locker room for long periods of time until athletes could come out and do one last interview with her. The tales do resemble the movie "Hidden Figures," about women in NASA at times. Visser deserves all sorts of credit for fighting that fight.

Otherwise, though,  this is relatively standard material. Books by journalists often are simple recounts of stories covered and personalities encountered. Visser seems to have become quite friendly with a variety of personalities over the years. There are stories about such people as Rick Pitino, Bill Parcells, Bill Belichick, Joe Torre, and co-worker John Madden. There's less distance between reporter and source in such situations, apparently. Visser apparently posed for photos with all of them and then some, based on the illustrations here.

There are plenty of other stories told along the way, often about travel. Visser certainly has worked at almost all of the major events on the sports calendar. It's a little surprising, then, that some of the material feels like filler. Anecdotes and suggestions about food and restaurants around the country, not to mention a short chapter about her hair, don't work so well.

By the way, I think every person Visser has ever met is on the list of acknowledgments. Hope she doesn't have to send them all a copy of the book; she'll go broke.

It's good to have a book like "Sometimes You Have to Cross When It Says Don't Walk" in the stores, even if it's not a book you'll save forever. Visser's account ought to inspire some young girls to follow in her footsteps, which is great. And she's apparently enjoyed the ride since those early days, so it's easy to be happy for her.

Be notified of new posts on this site via Twitter @WDX2BB.
Posted by Budd Bailey at 9:34 AM

Labels: Review: Sometimes You Have to Cross When It Says Don't Walk (2017)