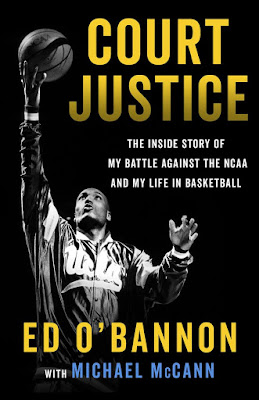 By Ed O'Bannon with Michael McCann

Ed O'Bannon may be remembered as a basketball player who did more for the sport off the court than on it - and he was very good on it.

O'Bannon is still fondly remembered in the Los Angeles area for leading UCLA to a national championship in 1995. It's the Bruins' only such win since John Wooden grabbed 10 of them in the sport's greatest dynasty.

After an NBA and European ball career, O'Bannon settled in as a staff member at a car dealership outside of Las Vegas. One of his friends pointed out that the friend's child was playing a video game - and O'Bannon's image was part of the game since the '95 UCLA team could be used as one of the teams. O'Bannon was excited at first, but then he wondered how the game could use his image with his permission or without compensation.

That led to a lawsuit, which turned into a class action filing on behalf of past and present NCAA athletes. His name will always be attached to the action, which eventually led to a clear legal victory in the case and some changes in the way the NCAA does business. Now O'Bannon gets to tell the story of the case, as well as what happened in the rest of his life, in "Court Justice."

O'Bannon won his initial case and then won an appeal that changed the terms of the damages somewhat, although the overall impact for the moment is somewhat limited for some complicated reasons. Still, athletes are receiving funds connected from video-game sales, and you can bet that more battles are coming now that the NCAA is subject to anti-trust laws in this area.

This is an interesting story that will be remembered down the road, but it's tough to say that O'Bannon is the best person to tell it. He was told going in that the case would go on for years (it did) and he wouldn't see much compensation (he didn't), but went ahead with it anyway because he wanted to right a wrong. More power to him for that. But while O'Bannon obviously learned a lot about the legalities involved, it's clear that he was something of an on-looker. O'Bannon brings along Sports Illustrated legal analyst Michael McCann for help here, and the implications of the case are discussed. But it's really difficult to turn anti-trust cases into "beach reading."

O'Bannon does make some contributions along the way, though. His personal story is instructive in some areas. For example, the NCAA has a rule that says student-athletes are supposed to spend only 20 hours per week on their sport. It's a nice idea, but unrealistic. In these days of teams in the same conference being spread out across the country, it's difficult to stick to anything close to that 20-hour guideline - which means that the job of student and the job of athlete are both full-time jobs. That's why students are essentially told to take less-than-demanding majors so that they have adequate time for sports. It happened to O'Bannon's sister.

O'Bannon's own story has some merits too. He came out of UCLA as a lottery pick by the New Jersey Nets, which did major improvements to his bank account. But he bounced around the NBA, never finding the right spot for a couple of years. O'Bannon ended up in Europe, where he played for several more years, but certainly his career didn't followed the forecast.

O'Bannon and McCann finish with a dozen ideas to improve the system. The subjects are covered at length and worth the consideration of someone in authority. The thoughts on the drafting of college players by professional leagues are particularly interesting. It would be interesting to know what might happen if NBA and NFL changed its rules to follow the NHL mode for eligibility. In hockey, when a player is drafted at 18, he can still go to college and play there while the team retains his rights. In basketball and hockey, once players declare their eligibility for the draft, they become the equivalent of radioactive to colleges and can't return even if they aren't drafted. That's quite a waste of talent, considering several players wash out quickly.

Sometimes it's difficult to fans to consider the big-picture issues in sports, because they are complex with several interfering factors. "Court Justice" is naturally one-sided in its arguments, and it's frequently on the dry side. That makes it hardly for everyone, but it's relatively quick and gets to the point. Those seeking information on the landmark case will find it educational.

Be notified of new posts on this site via Twitter @WDX2BB.
Posted by Budd Bailey at 4:18 PM