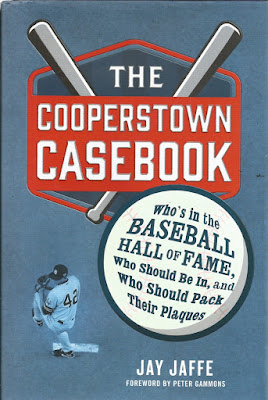 It turns out this is a really good time of year to read "The Cooperstown Casebook," even if it was published in July.

We're only a few days away for the announcement about which players have been voted into the Baseball Hall of Fame, and apparently it's going to be a big year for inductees. According to those who keep track of such things, either four or five players are likely to make it to Cooperstown.

Baseball's Hall might have the biggest following attached to it in terms of fan interest. There are so many different positions in football that it's tough to compare candidates, while the Basketball Hall of Fame mixes college and pro play to set up different qualifying standards.

If you're one of those people who can debate on the qualifications of a particular player, then this book probably should be in your bookcase. Jay Jaffe has put a lot of effort into studying the various inductees and candidates over the years. He has crammed a great deal of analysis into more than 400 pages of work.

The first 100 pages or so of the book is devoted to basic background information on what's to come. Jaffe goes over the various ways that players, managers and contributors have been named to the Hall. The process has changed over the years quite a few times in an attempt to create something closer to a perfect system. For example, the Veterans Committee - often stocked with ex-players - was somewhat famous for picking pals of its members. There are some really bad choices, relatively speaking, in Cooperstown as a result. That's blurred the line a little bit over what the standards for entry are, although we seem to be doing a better job lately.

If we have improved our methods of determining who is a Hall of Famer and who isn't, the new statistics that have grown importance in recent years has been a big reason why. Lots of smart people have worked on ways of determining who the best players in the game are, and the toolbox has gotten pretty full. In fact, Jaffe himself invited JAWS, a way of comparing a potential inductee with other players at the same position. There is no perfect way of making such comparisons, naturally, but every little bit helps.

From there, the book gets into the players on an individual basis. Each position gets a chapter that opens with a discussion of a player who certainly is or was (mostly is) in the mix for the Hall of Fame at some point - David Ortiz, Bobby Grich, Curt Schilling, Mike Mussina, etc. From there, all of the inductees get the once-over, as do some players who are good candidates now or will be when they are eligible.

This raises some interesting questions in the discussion. How much does a long, productive career matter? It didn't hurt Sandy Koufax's chances but others weren't so lucky. Does postseason glory help? Clearly it doesn't hurt, but the guessing is that while Ortiz will receive a major boost from his October body of work, Curt Schilling wasn't as fortunate despite a formidable autumn resume. It's fun to see Jaffe pick out players who are better candidates than they appear to be because of some relatively hidden statistics. Grich and Dwight Evans fall into that category.

Certainly this book is targeted at those fans who enjoy baseball history; they might even learn something about 19th century players like slugger Roger Conner. A familiarity with new-wave statistics would be helpful too. If you can pass those tests, "The Cooperstown Casebook" will be a rewarding read that will stay on your bookshelf for a while.

Be notified of new posts on this site via Twitter @WDX2BB.
Posted by Budd Bailey at 12:49 PM