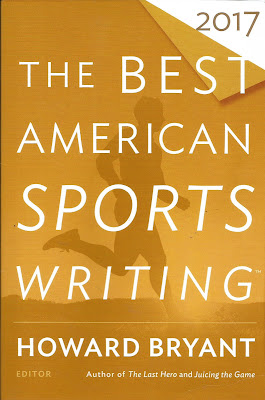 It's year 27 for the Best American Sports Writing series, and it's Howard Bryant's turn at the plate.

The anthology books have gone through plenty of guest editors since 1991, including such names as David Halberstam, Frank Deford, Dan Jenkins, Peter Gammons and Michael Wilbon. Bryant is a worthy successor to that list.

The veteran sportswriter has did good work for a couple of newspapers, writes now for ESPN, and has written three fine books. He's obviously smart, and he's obviously serious - and that shows up in his selections here.

Just to review, series editor Glenn Stout collects several nominated stories and then passes them to the guest editor. That's followed by the no-doubt agonizing process of getting down the number of stories to fit a book. In this case, we have 27 stories to read.

And read them we do, because they almost always are worth our time. Maybe that's why the series has been around for 27 years.

There's not really a game story to be found here, or much that was written on a tight deadline. Stories on the death of Muhammad Ali or the completion of the Wimbledon tennis tournament might be the only qualifies, although neither had to be written for The New Yorker in two hours.

What's that leave? Plenty of long stories on a variety of subject, mostly serious in nature. My personal favorite was a 27-pager by Wright Thompson called "The Secret History of Tiger Woods." It's almost required reading as Tiger tries to make one last comeback on the PGA Tour, as Thompson obviously made an extensive effort to find out more on what makes Woods tick - no small challenge.

In hindsight, some of my favorite stories were about personalities. William "the Refrigerator" Perry seems to be on a path that will not end well. Football coach Barry Switzer is having fun in "retirement" being Barry Switzer, as we could have predicted. Dusty Baker's story seems more poignant now that he's out of work as the Nationals' manager. Figure skater Debi Thomas appeared to have it all together in her competitive days, but you wouldn't use that description now. Warriors basketball coach Steve Kerr has a fascinating life story, and it provides him a perspective that is broad enough to be unique in sports.

There are plenty of other stories that aren't typical stories that turn up in sports pages but still lure us in. I've been to Jim Thorpe, Pennsylvania, and the battle of over Thorpe's body continues to be an everlasting and bizarre story. I'm not sure that a story about a 30-something woman enrolling in high school in attempt to make up for missed opportunities as a teen has much to do with sports, but it was a worthwhile story. An accounting of the daily sports fantasy business is a long one, but sorts out the particulars well. We get a good lesson that determining the sex of an athlete is not an either/or proposition, as seen from the eyes of a young girls from India. The tales of refugees in the Olympics and Africans trying to find a basketball home in America really are stories of strangers in a strange land.

The one danger of including serious and unusual subjects is that sometimes you'll lose the audience for a moment along the way. That happened to me in a couple of the stories here; I'll let you guess their identity. But the percentages are in Bryant's favor.

Stout, who has done an excellent job as caretaker of the series, talks in the foreward how the series has been inspiration to many young writers, which is excellent news. You always get something good in these books, and that's why you should keep reading them year after year.

Be notified of new posts on this site via Twitter @WDX2BB.
Posted by Budd Bailey at 5:46 PM