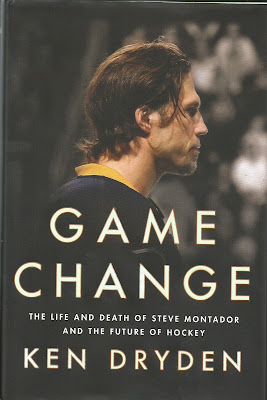 You're probably heard about the problems that the National Football League has been having with concussions in recent years. Several players who have been diagnosed with brain damage after their deaths (the best test only can be done at that point), and the numbers continue to grow with each passing month.

The National Hockey League has similar problems. It just hasn't received as much attention as the NFL.

But it's certainly there. Ask the family and friends of Steve Montador, who was diagnosed with chronic traumatic encephalopathy (CTE) after his death in 2015. He'll certainly become a poster boy for the subject thanks to the new book, "Game Change" by Ken Dryden.

Montador wasn't a superstar at any point in his career. He worked hard during his days as a youth and junior player, doing what it took to make the team better. Montador wasn't drafted by an NHL team, but he found a way to reach the big leagues. The defenseman was a classic fifth or sixth defenseman - not good enough to stay with one team for a particularly long period of time, but usually good enough to land a job somewhere else. Montador bounced from Calgary to Florida to Anaheim to Boston to Buffalo to Chicago.

The problem was that Montador picked up some concussions all along the way, and had some after-effects that were serious. He also had some alcohol and drug abuse issues as an NHL player. Montador seems to be well-liked by teammates, and was considered a good person. One administrative worker tells the story about how the defenseman bought two season tickets, and asked that the seats be given to a pair of deserving fans every night - and that those fans be brought to the locker room after the game to meet Montador personally.

Dryden is a great choice to write a book like this. He obviously knows hockey, as he was a Hall of Famer as a member of the Montreal Canadiens. Dryden has written five books, and they are all superb. The ex-goalie is a patient, intelligent observer and doesn't miss much. Dryden's other books were all extremely well done. He is obviously had full access to Montador's family and friends, and so gives the reader an upclose look at Montador's problems until his death at the age of 35. By the way, we still don't know much about Montador's final days.

Even more interesting is the way Dryden moves into other areas. He has some great analysis about how the game of hockey has changed over the years, as it has gotten faster and faster in its evolution. The problem is that a faster game can lead to more serious head injuries, but that the league hasn't been in a hurry to take a long look at the issue. It's a look at the history of the sport from a completely different perspective. Dryden also talks at length with players like Keith Primeau and Marc Savard, who saw their careers end prematurely with concussion-related issues.

The ending is a little different too. Dryden has written about the problems of head issues elsewhere, such as editorial pages, but this is a long (43 pages) treatment on the subject. His solution comes in two parts and is pretty simple - outlaw hits to the head of any kind (including fighting), and no "finishing a check."  Would it help? Probably. Is the NHL willing to go to that point? Not so far.

It's easy to get bogged down in the discussion of concussions in sports, mostly because the answers aren't clear. We don't know when the problems started, so it's tougher to assess blame. Some people recover from head injuries quickly; others never do come around. But clearly this isn't an issue that's going away soon, no matter what's responsible for it. We'll see if Dryden's well-reasoned look at the subject will help move the discussion forward.

Learn more about this subject.

Be notified of new posts on this site via Twitter @WDX2BB.
Posted by Budd Bailey at 4:36 PM