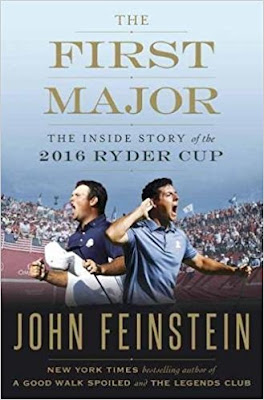 Sometimes, the ball kicks off a hill in the rough, and puts your ball firmly in the fairway. Sometimes, your reward for a perfect drive is a landing spot right in the middle of a big, ugly divot.

John Feinstein knows all about the golfing gods, having written about the sport for several years. When he decided to write a book about the 2016 Ryder Cup, he certainly had hopes of a close or at least memorable finish. After all, the book figured to be released about a year after the competition between the United States and Europe was finished.

Feinstein didn't catch a break in terms of the match. You probably remember that the United States won convincingly in the 2016 version of the biannual match. But that only takes a little away from "The First Major," an always interesting book on the Ryder Cup and the qualities that make it a unique sporting event.

The Ryder Cup used to be a nice little event featuring the best of the United States and Great Britain/Ireland. The problem was that the United States almost always won. So in 1979, the GB/I team became the European team - and it was more than competitive. Europe had had the upper hand in the matches overall leading up to the 2016 clash in Hazeltine - winning six of the previous seven events. Meanwhile, the fans on both sides took the enthusiasm level to another level, making seem more like a Michigan-Ohio State football game than a pleasant golf match among gentlemen.

And what does that mean? Pressure on all concerned. Golfers usually play for themselves and their bank accounts. They are used to that, and we see great performances all the time during the year. (Those who don't measure up almost never appear on the Sunday television broadcasts.) But the Ryder Cup adds the team concept to the equation for one of the few times on the golfing calendar. When the golfers have a bad day, they go home early and practice for the next week. But golfers in the Ryder Cup are playing for their country. Everything becomes magnified in such a setting - good shots and bad ones, which come up at a surprisingly high rate.

That history and intensity received much of the focus in the book. Feinstein does a good job of tracking down everyone involved, including those who had taken part in events in the years leading up to the 2016 matches. No one does too much ducking when it comes to questions about controversial events from the past. Even better, there are some good and unexpected stories about the players and captains. Who knew that Matt Kuchar was so funny?

Feinstein's books are always thorough, and that reporting skill certainly shows up here. There are plenty of times when he describes events that were private or that happened behind closed doors - such as deliberations over pairings, thoughts at key moments in particular matches, team gatherings, etc. As usual - I've read about all of Feinstein's work for adult audiences (he has written some for kids) - it's a fun, easy read. The longtime author seems very comfortable writing about this subject.

It's a little tough to decide if this book is very good or exceptional. Perhaps it can be best summed up this way - it's tough to picture a treatment of the Ryder Cup done any better. Golf fans, then, probably will call "The First Major" exceptional, and zip through it while enjoying almost every page.

Be notified of new posts on this site via Twitter @WDX2BB