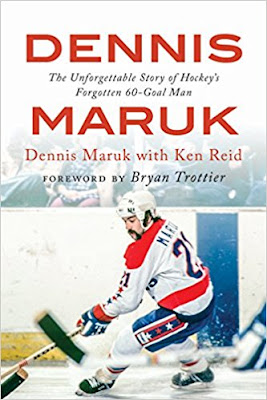 By Dennis Maruk with Ken Reid

Nineteen players have scored 60 goals in an NHL season. There's little doubt about who are the two most anonymous members of that club.

Even Dennis Maruk, who is one of the answers to that question, knows he belongs there. He also knows that Bernie Nicholls is the other surprising answer. They may not be household names, but they are linked with named like Gretzky, Hull, Lemieux, Bossy and Lemieux.

That 60-goal season might be the reason why Maruk wrote this self-title autobiography. Fans of hockey from the 1970s and 1980s might want to know a bit more about him.

The NHL struggled at times during the 1970s, and Maruk was part of the ride by playing on some bad teams. He was the last of the California Seals (Oakland) in the NHL, and moved on to be a Cleveland Baron, was shipped to Minnesota, was traded to Washington - where he did his best work for his best teams - and then returned to Minnesota. The forward only came reasonably close to a Stanley Cup once, reaching the semifinals before running into a powerful New York Islanders team that was in the midst of a dynasty.

This book is broken into 60 chapters, which is an interesting gimmick. But in a story that takes relatively very little time to tell, I'm not sure it works so well. Maruk mentions what should be big moments in his life throughout the book, but is quick to say that he remembers absolutely no details from them. He even did a little searching of YouTube, but didn't find much. Mix that in with a lack of stories about good teams and players, and it takes less than two hours to get through this.

Since retiring from hockey, Maruk has been a little lost. He has had a series of jobs in and out of hockey over the quarter-century plus. At one point, Maruk announced to his wife in Minnesota - who had a good professional situation of her own there - that he had taken a job in Louisiana and they'd be moving. Period, end of discussion. That didn't go over too well. It led to a divorce, and puts the reader squarely in the ex-wife's corner.

To be fair, Maruk had bigger problems than that during his pro-hockey days, to the point where he came close to suicide. He's better now, and you hope he will stay on the right track for the rest of his days.

Dennis Maruk's story might have made for an interesting television feature or magazine articles, as he's a reminder that a midlife career change doesn't always turn out to be seamless. The book version probably won't work for most.

Be notified of new posts on this site via Twitter @WDX2BB.
Posted by Budd Bailey at 5:29 PM