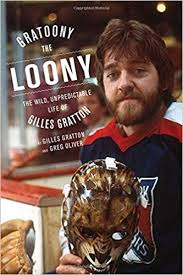 By Gilles Gratton and Greg Oliver

A great many "characters" have passed through the portals of professional hockey. Gilles Gratton not only is one of them, he can lay a claim to being the biggest character of them all.

Gratton spent some time in the World Hockey Association and the National Hockey League in the 1970s. Not surprisingly, he was a goalie - a position that is filled with unconventional actors. Gratton wasn't a bad goalie, but his skills always took a back seat to his antics and comments.

It took a while for Gratton to get his thoughts down on paper - maybe too long, since few might remember him at this point - but he finally has done so. "Gratoony the Loony" is that autobiography.

Gratton does a little explaining about his life and his actions in this quite short book. Tellingly, it doesn't sound like he had a particularly happy childhood,with parents who were frequently indifferent. Gratton sort of fell into hockey; it's probably difficult not to give the sport at least a try if you are growing up in Canada. Besides, his brother Norm was good enough to be an NHL player. Gilles turned out to be pretty good at goaltending - good enough to climb the ladder, even if he wasn't particularly enthusiastic about playing it.

Gratton's fame came through his actions. He famously skated naked in an arena during a practice, which he says now was came on something of a dare as a way to obtain a dozen sticks for youth hockey. He refused to play in one NHL game by claiming the moon was lined up incorrectly in the sky, which he now says was his way of protesting the firing of coach Billy Harris. Some other, R-rated stories pop up here which probably cross the line of funny-or-sick to the sick side. The goalie sounds like he was drunk or high for most of his career.

It seemed inevitable that such a player would have problems with management somewhere, and Gratton was no exception. He spent a year with the Rangers, headed down to the minors, and then was released. He's been looking for "enlightenment" since then, and the concluding chapters talk about that. Gratton once saw a stranger and said he was destined to have three kids with her. He was wrong - he only had two. A discussion of some of his past lives comes up, as does stories about how his body can go to sleep while his mind stays awake. He works for an auction house that specializes in hockey memorabilia - a little ironic for a guy who hated to play hockey.

Coauthor Greg Oliver rounds up some other quotes from teammates, etc. about Gratton, filling out the book a little bit. They all seem to like him, even though I'm sure his attitude probably left them shaking their heads a bit.

Those old enough to remember Gratton's time in hockey might enjoy reading "Gratoony the Loony" in order to see what the fuss was all about. Otherwise, it's difficult to recommend it.

Be notified of new posts on this site via Twitter @WDX2BB.
Posted by Budd Bailey at 11:15 AM