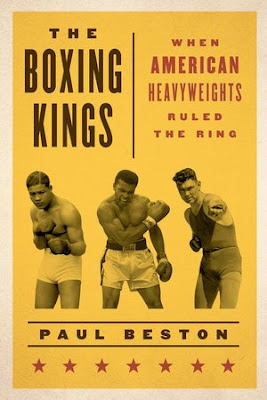 The heavyweight division of boxing has had mostly American champions over the history of the sport. The tradition started by John L. Sullivan in the 19th century, and continued through such greats as Jack Dempsey, Joe Louis, Rocky Marciano and Muhammad Ali. There were a few "foreign" boxers on the list in the 20th century, such as Max Schmeling and Ingemar Johansson.

It was a heck of a run, and it certainly played a role in the growing of boxing as a spectator sport in the United States. That run is mostly over.

It's not a bad time, then, for a review of the subject. Paul Beston jumps all in with his fine book, "The Boxing Kings."

Organized boxing came out of a different time. The first set of rules go back as far as 1743, although they were updated in the 19th century. Eventually the heavyweight champion was known as the guy who could honestly say "I can lick any man in the house," no matter what house he was in. Eventually, Sullivan earned that title.

Beston goes through the famous title bouts and the other champions. What's great about boxing is that much of it has been recorded on film over the years. A big fight was a large enough event to lure primitive cameras along, because people would pay to see it after the fact. Therefore, we can take a look back and see what Jess Willard and Jack Johnson looked like about 100 years after they were in their prime boxing days.  The author obviously did that, and brings a trained eye to the analysis of the fights.

The major stars receive much of the coverage here, and deservedly so. Still, all of the heavyweight champions receive a mention here, including those who seemed to have the title for about an hour. And almost every bout is mentioned. The classic fights - Ali-Frazier, Tunney-Dempsey,  Louis-Schmeling, etc. - are covered in much more detail, and Beston comes up with some new material that will surprise even some veteran fans.

Beston is the managing editor of City Journal, and has written for several newspapers, magazines and websites. He obviously knows his stuff, and that shows up on every page here.

Boxing's popularity in the United States has declined in recent years, probably in part of the lack of a heavyweight champion from this part of the world. There are other factors as well, such as the rise of Mixed Martial Arts and an improved standard of living that has made boxing less attractive to potential athletes. Can you name any of the current heavyweight champions? (The fact that there are more than one at a given moment is part of the problem.)

"The Boxing Kings," then, takes us back to a time when boxing mattered. It's funny how time has flown. Mike Tyson hasn't been a big factor in boxing for more than a quarter of a century, and Evander Holyfield's prime checks in at about 20 years ago. That may limit the audience for a book like this - and the $36 list price may not help in that sense either - but those looking for information on the subject will find this an excellent source of material.

Be notified of new posts on this site via Twitter @WDX2BB.
Posted by Budd Bailey at 1:49 PM