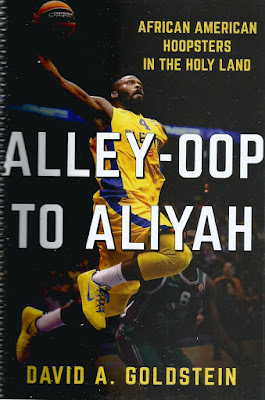 By David A. Goldstein

Those who follow college basketball relatively closely realize that the NBA isn't the only post-graduate course for players. Each year, several Americans leave their native country to test their hoop skills in the pro leagues of other countries. Not only does it offer a good paycheck (not by NBA standards, of course, but it can beat working for a living), but it's a relatively cheap way to see the world.

Once the players get there, though, life can turn, well, interesting. The cultural differences can be striking and difficult, depending on the location. And certainly one of the most interesting places to play is Israel.

That's the focus of David A. Goldstein's book, "Alley-Oop to Aliyah." If many stories in life are centered on some form of a "stranger in a strange land," this certainly qualifies.

On one level, this seems like an odd fit. An African American basketball player that walks down the street in Tel Aviv is likely to stand out from the crowd, pardon the obvious pun. On the other hand, Israel is a modern country, thus reducing the adjustments needed by travelers. The people are very friendly, and they generally speak English.

Goldstein covers the subject thoroughly here, including some areas that might not come immediately to mind when thinking about it initially. A surprisingly amount of players who play for at least a few years in Israel end up moving there. Some have gotten married and raised a family there, and a few have converted to Judaism. Goldstein tracked down a couple of dozen Americans who played or play in Israel. They are generally success stories, although it's fair to note that the ones who hang around obviously like the situation and the country.

The presence of the foreigners has raised some questions for Israeli basketball. Do these players raise the quality of play for all, or do they take jobs away from native-born players? A little of both, probably. Maccabi Tel Aviv dominates the league, as it has the most money. (Think of the New York Yankees' payroll and record of success on steroids, proportionately.)  The players say it takes a little time to get used to the strict security measures, but they feel safe once they do. The African Americans generally add they haven't noticed too much overt racism, although it has been difficult for them to move into prime coaching jobs there after their playing days are over.

There are a couple of drawbacks to the story as presented here. Most of the interviews for the book appear to have taken place some years ago. I'm not sure if there's a story to that - it can be tough to find a publisher for anything these days - but it is odd to read lines like "he said in a 2009 interview." And readers should keep a bookmark on the appendix, which has brief bios of the profiled players. My enjoyment of the book increased once I did that. It's an interesting group, but most basketball fans only will have heard of a few of them before reading this.

"Alley-Oop to Aliyah" isn't a long book, but may be more information than a casual fan would want. A long magazine article might satisfy the curiosity of those readers. But for the ones who seek a full story, the book ought to work for them nicely.

Be notified of new posts on this site via Twitter @WDX2BB.
Posted by Budd Bailey at 10:39 AM