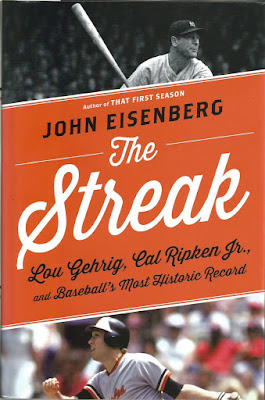 Baseball fans in the 1960s and 1970s knew that a handful of baseball records were about untouchable. That word could be used to describe Cy Young's win total of 511, and Rogers Hornsby's one-season batting average of .424. The game had changed a great deal since over the year by then, and no one had come close to such marks for quite a while.

Another, very different record also was in that category. Lou Gehrig played in 2,130 straight games for the New York Yankees. Few had close to half of that total for years, and it seemed improbable that anyone else could touch it. The same theory applied to Joe DiMaggio's 56-game hitting streak, another outlier that defies comprehension in some ways.

Here we are in 2017, then, and DiMaggio's record still stands tall. But it turns out we were really wrong about Gehrig's record. Who knew that Cal Ripken would come along?

Ripken went sailing past Gehrig in 1995, and finished with 2,632 straight games to his credit. It would be easy to say that never, ever will be touched, but maybe we know better than to deal in absolutes in such case.

Ripken and Gehrig have been linked ever since, so a book on the two of them and their streaks seems like a natural - even 22 years after they were connected. But John Eisenberg has a bigger goal in mind in his book, "The Streak." While focusing on those two famous streakers, he examines the entire concept of playing in a large number of games in a row.

It's an odd record as these things go. You have to be exceptional to set a career record for stolen bases or hits, but you just have to show up day after day in order to rate highly in this category. That's not unimportant - perfect attendance has been desirable for most since grammar school. Still, you have to be good enough to earn a regular spot in the lineup, and then stay there for several years.

Eisenburg takes this concept way, way back to the beginnings of professional baseball. He helps to bring alive those early "streakers," and recounts a few controversies that came up along the way. Record-keeping then wasn't perfect in the late 1800s, so a couple of mistakes were make that changed the numbers and the record book. Interestingly, such streaks weren't a big deal then, which is why George Pinkney and Steve Brokie weren't household names even back when they played.

Eventually, Everett Scott of the Red Sox and Yankees went flying by everyone, and then Gehrig came along. His goal was to play every day, and he succeeded for more than a decade. As Eisenberg points out, there were a few close calls along the way. Once in a great while, Gehrig did things like hit in the top of the first inning and then exit, thus keeping his streak in tact. Major League Baseball has changed its rules about such actions and streaks over the years. You now can't simply be placed in the starting lineup and then be taken out for a pinch-hitter in the top of the first and still have it count as a game played. But Gehrig's tactics do make Ripken's ledger even more impressive, in that he went seasons without missing a single inning.

Eisenberg does a fine job of talking to several people about Ripken's big moments in the streak, making the feeling come along nicely. He also gets some opinions on how Ripken and Gehrig had slightly different obstacles to overcome in order to play so long, and on why the long consecutive streak may be a thing of the past.

Admittedly, a consecutive-game streak is almost a curiosity as these things go, and that might limit the audience a bit. Eisenberg admits that it took longer that he would have liked to finish this book. A natural landing point for the effort would have been 2015, 20 years after Ripken broke Gehrig's record.

But those who dive into "The Streak" will find some definite rewards. I'm not sure how the subject could be covered any better, and it will fully satisfy the appetite of avid baseball fans out there.

Be notified of new posts on this site via Twitter @WDX2BB.
Posted by Budd Bailey at 3:33 PM