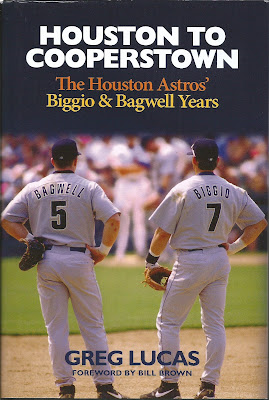 I'm not sure the Houston Astros were the most faceless team in baseball for some time, but they were in the argument.

Think about it. The team entered the National League in 1962, and struggled like most expansion teams. In those early years, most people probably thought of a stadium - the legendary Astrodome - when asked about the team. They didn't have many iconic players, and you could argue that they traded their best one (Joe Morgan) before he became famous. Houston had some memorable moments but oddly they were associated with losses. The 1980 playoff loss to Philadelphia, and the 1986 playoff loss to the New York Mets were amazing moments but ultimately unsuccessful ones.

The Astros had some very good players pass through Houston, such as Morgan and Nolan Ryan, and some good players who stayed like Larry Dierker and Jimmy Wynn. But there were great players who arrived and stayed, like Cal Ripken or George Brett.

That all changed, or at least started to change, in 1988. It is when Craig Biggio first arrived on the Astros' roster. A few years later, Jeff Bagwell followed Biggio to the big club. That was a heck of a right side of the infield for a decade. That's why Greg Lucas was smart to highlight those two in his brisk history of the Astros, "Houston to Cooperstown."

Biggio might have had one of the most unusual skill sets in baseball. No one has ever gone from catcher to second base to center field during the course of a career, and played it well. He was essentially too good an athlete and player to stay as a catcher, where the wear and tear of the position shortens careers. Bagwell was a topnotch power hitter, someone who moved from third to first at the start of his career and found a home.

The Astros still didn't receive a great deal of publicity with them around, but they popped up in the playoffs a few times with these two leading the way. Both of them piled up some big numbers. It's fun to look back and here and be reminded of just what they did. Biggio might have had the more impressive career because he was a little better in the counting stats, like 3,000 hits. Bagwell's body (the shoulder in particular) broke down toward the end, perhaps because he lifted too many heavy weights in the gym in an effort to stay strong. Both are now enshrined in Cooperstown, as Bagwell went in this year - which couldn't have hurt book sales.

Lucas, a former broadcaster for the team, covers the early years quite quickly, and lingers on the days of the two stars. Once Biggio and Bagwell are done, the author moves on to the last decade or so, which started with the arrow on the team pointing way, way down, but changed 180 degrees. Now they are one of the best teams in baseball.

If I could be allowed a bit of nit-picking, there are a couple of issues with the book - one of which has nothing to do with the publication itself. Biggio and Bagwell come off as good guys and solid citizens throughout. There's not much drama there. I could see how they'd be easy to cheer for, but their stories will leave your draw undropped. There also are some editing issues along the way, mostly in the form of the odd typo. Red Sox fans certainly will notice that Yastrzemski is misspelled twice here. Baseball readers are notoriously sensitive to such things - maybe too sensitive - but one more read by an editor might have helped.

Otherwise, "Houston to Cooperstown" reaches its goals nicely. It will bring back memories of Astros gone by for the local fans, while filling in the gaps of knowledge for the out-of-towners. I've known Greg Lucas since the late 1970s, and in my slightly biased viewpoint he's hit another line drive.

Be notified of new posts on this site via Twitter @WDX2BB.
Posted by Budd Bailey at 2:41 PM