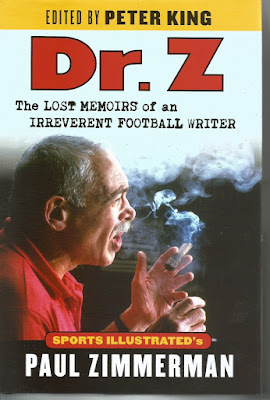 Sportswriters always liked to tell stories about Paul Zimmerman, the legendary football reporter for Sports Illustrated who was known for his fanatic and complete dedication to his job. Here's one of them, told during Super Bowl week one year, which gets the point across. If it's not true, it should be.

Zimmerman was working for the New York Post one fall Saturday, and was assigned to cover some small college game. He wanted to see a big college game that started at 4 p.m. or so on television. Zimmerman liked to chart games as they went along, and he almost physically needed to be watching the game from the start - missing a play or two was unacceptable.

Zimmerman covered the first game, and shortly before its conclusion dashed down to the field to interview the coach and a star player or two briefly. Then he got in the car, drove to a nearby hotel, and got a room on the sixth floor of a hotel - arriving at 3:55 p.m.

Zimmerman grabbed his notebook, sat down, flipped on the TV ... and saw nothing. The television wasn't working. He called the front desk. "This is Paul Zimmerman in 612. My television set is not working. If I don't get a new room in the next five minutes, I will throw the television in this room from the balcony into the swimming pool below."

He got the room, and saw the kickoff.

Zimmerman's distinct literary voice has been quieted for the past nine years. He suffered a series of strokes in 2008, and cannot read, write or speak. Yes, some things just aren't fair.

Before the stroke, Zimmerman had taken a sabbatical and was hard at work on his memoirs. There wasn't much rhyme or reason to what he got down on paper, but he figured he would get to that. Fate had other plans.

But now friend and coworker Peter King of Sports Illustrated has taken those words, and organized them a bit. He also has added some columns written by Zimmerman for Sports Illustrated, and the result is an unexpected (because of the physical problems) surprise of the season: "Dr. Z - The Lost Memoirs of an Irreverent Football Writer."

The book is broken into 14 chapters, the various parts of Zimmerman's life. By far the longest is his personal all-time team in pro football, which is great fun to read. Zimmerman liked nothing better to look at film of old games and great players, and came up with ratings. The ratings are about a decade old at this point, and it would be interesting to see what he might do with the subject now. For example, has Tom Brady replaced Joe Montana as the greatest quarterback of the modern era? (John Unitas still wins the old school division.) Montana, by the way, is the subject of a fascinating feature story by Zimmerman, reprinted here from Sports Illustrated.

Football drives the book naturally, and there are stories from the Super Bowls and quarterbacks. But the Olympics get plenty of space, as do stories about journalism. There are stories about boxing with Ernest Hemingway, and about going to Columbia with a future KGB agent. The last four chapters turn personal - they are called "Wine," "Collecting," "Authority," and "National Anthem." That last one needs an explanation - Zimmerman used to time them at sporting events and keep records. That's not surprising from a person who could tell you how many steps there were from the lobby of the Newark airport to Gate 26.

A book like that almost has to be a little disorganized, since it was a work in progress when it came to a nearly 10-year halt. But, King did a good job of putting it all together so that you'd get the idea of what Zimmerman's life and talent were like.

Fans of Zimmerman probably will think that they are doing him and his family a little favor by supporting this project with a book project, and they no doubt are. Still, "Dr. Z" stands up pretty well for long-time football fans. And if you don't remember Zimmerman's work, this will open your eyes to a unique individual.