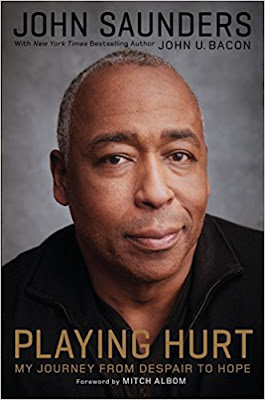 By John Saunders with John U. Bacon

Most books by nationally-known sportscasters follow a pattern. There are entertaining tales of the early days, jumping from outlet to outlet, and then the story moves into a recounting of games and personalities encountered over the years.

"Playing Hurt" is definitely not that book.

The late John Saunders had a lot happen to him in his too-short life. He tells us about many of them in his memoir, which in spots is painful to read.

From a distance, Saunders was a rather typical success story. He first became nationally known when he landed at ESPN in the late 1980s, just when the outlet was ready to take off. Saunders did a lot of events over the years, and did them well. He wasn't a polarizing figure on the air, content to merely tell you what was going on.  There's a certain dignity in that approach that was welcome; you don't have to shout all the time to get attention.

What's more, Saunders was a black from Canada, which made him different in a professional world filled with white males. If you were a youngster of color looking for a role model, Saunders certainly could fill that role.

That's all well and good, but there is little about that side of Saunders in the book. He starts off in dramatic fashion, telling about a trip he took in 2012 to the Tappen Zee Bridge north of New York City. Saunders pulled to the side of the road of the bridge, got out of the car, walked to the edge, and thought about jumping. Depression, it turns out, came along with Saunders throughout his life, and he had to battle the demons almost every day. It's not what you'd expect out of person with a dream job and a lovely wife and two daughters.

Saunders goes into his childhood in Canada from there, and it's not pretty. His father was abusive (physically and verbally) when he bothered to be home, which wasn't often because he was usually in Ohio. His mom usually had to raise the family of three children by herself, and she had plenty of her own problems. Saunders was sexually molested by the daughter of a friend of the family before he became a teenager, causing problems in relationships for the rest of his life. Moving around a bit probably didn't help either. Saunders developed problems with alcohol and drugs, and his relationships with women were frequently distant and brief. And depression started to turn up with frequency; it would be a lifelong passenger along with diabetes.

At that point, it's easy to wonder how Saunders turned out so well professionally. A bright spot was that he was pretty good at hockey, which got him an invitation to play for a couple of colleges. Saunders sort of stumbled into a broadcasting career, starting with a job in Espanola, Ontario - I've been there, and it's even smaller than you might think it is. From there it was on to other stops, including Toronto and Baltimore, before landing at ESPN. There were some mental health issues along the way, but apparently he made his life work.

If all of that weren't enough, and it certainly would be for most people, Saunders blacked out and hit his head at work in September 2011. That caused a serious brain injury that would need a great deal of therapy. It also led to what could be called an addiction to a strong prescription drug that was issued by a doctor for reasons only known to him; other doctors were shocked at the dosage.

The story essentially ends in 2013, when Saunders has been weaned off the prescription drug and he was feeling better. Some readers will remember that when Saunders died in 2016, not a great deal was said about the reason or reasons why. While reading the book, it's easy to wonder what might have happened and why. Thankfully, co-author John U. Bacon writes an afterword about the next three years. Saunders collapsed in a bathroom and could not be revived. Doctors said he died of a combination of an enlarged heart, complications from diabetes, and another disease that affected the regulation of breathing, blood pressure and heart rate.

"Playing Hurt" isn't a happy story, of course, and it's sad that this almost-universally liked man left us too soon. Reading the story was almost shocking, and such stories aren't going to be brought to the beach to serve as a summer diversion. Still, Saunders' hope was that a book would show others with mental health issues that they aren't alone and should reach out for help. This should do that, and more.

Be notified of new posts on this site via Twitter @WDX2BB.
Posted by Budd Bailey at 10:26 AM