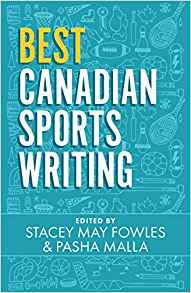 Edited by Stacey May Fowles and Pasha Malla

"Best Canadian Sports Writing" comes across as something of an interesting experiment.

Readers of this blog know that I'm attracted to the series of anthologies highlighting some of the best sports writing in America for the past 25-plus years. Therefore, it's easy to be interested in how the format and approach might work in Canada.

Apparently, a couple of people thought the same way. Stacey May Fowles and Pasha Malla have done a variety of articles and books over the years. The call went out for contributions, people responded with stories on all sorts of different subject, and - poof! - you've got yourself a book.

The first question, then, is: does the book work? I have rather mixed feelings about that, and not just because I'm an American reading a book about Canadian sports. Living in a border city will knock down a few of the barriers that might exist in such a situation.

The biggest difference might be that the American series relies quite a bit on some established sources for stories - Sports Illustrated and ESPN the Magazine, for starters, plus some big-city newspapers. That's not to say those sources have been come more diversified in recent years, because clearly they have - the on-line world is touching the entire world of journalism.

There are some stories in Canada's version that were somewhat surprising to read. I should start with the good news; I liked some of the efforts.

Dan Robson's story on a youth hockey team coming south from the area around Hudson Bay was very well done. I'm not sure I've read many fishing articles in my day, as I have no familiarity with the subject, but Cathal Kelly raised the subject in a way that was appealing and informative to this novice. John Lott's profile of the Toronto Blue Jays' batting practice pitcher was well done. Kristina Rutherford's profile of hockey player Harrison Browne was nicely written. Stephen Brunt's profile of the Blue Jays' Roberto Osuna was long but worthwhile.

But there were some stories about odd subjects that just didn't draw me in. Two articles on professional wrestling might have been one too many. There are tales of sumo wrestling, street drag racing, ice climbing, and ski ballet. I try to avoid stories on the UFC when possible. The transcript of a discussion of sports journalists in color struck me as relevant, but the writing didn't require more than a stenographer. And some stories, such as the essay on why a video of the Sun's surface was sort of like the New York Knicks, could have been avoided.

There were a few opinion pieces scattered along the way, and again some worked better than others. The article on how women's soccer has a chance to break through had me nodding in agreement at times, while a story on Kobe Bryant's appeal to Muslim got points for originality - although it might be a tough sell in most publications.

In the meantime, few of the stories were particularly topical. I'm not sure if that was a deliberate decision, but it sure would have been nice to read something about someone in the mainstream.

"Best Canadian Sports Writing" might have some appeal to the adventurous reader out there. I'd like to think I can qualify for that category, but it's a little over the line for me some of the time. Let's hope this became an annual effort, though, and perhaps the batting average will get better.

Be notified of new posts on this site via Twitter @WDX2BB.
Posted by Budd Bailey at 1:04 AM