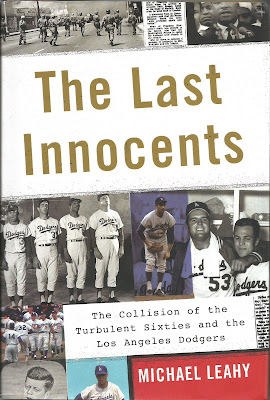 We all thought, at the time, the Los Angeles Dodgers were an interesting team in the 1960s.

This was a team, after all, that played baseball as if it were the Dead Ball Era (pre-1920). Not every game was 1-0, but it seemed that way. The Dodgers had a couple of Hall of Fame pitchers, and scratched out a run or two to help them win. A rally was a walk, two stolen bases and a sacrifice fly. John McGraw would have loved it.

But they may be even more interesting now, thanks to the work of author Michael Leahy. His thoroughly research book on those Dodgers, "The Last Innocents," does an excellent job on shedding new light on a team that came very close to being a dynasty.

Just for background's sake, let's review what the team accomplished in that era. The Dodgers moved out of Brooklyn in 1957, and started to turn over their roster. Their World Series win in 1959 was something of a mixture of the old and new, but the team had a new look by the team the team moved into Dodger Stadium in 1962 - a pitcher's park in which runs would be hard to come by.

Sandy Koufax was about to become, well, Sandy Koufax, and Don Drysdale was mighty good too at the top of the rotation. A scrawny shortstop named Maury Wills, considered a nonprospect by most, grabbed a starting job and revolutionized the game by bringing the stolen base back. The Dodgers almost won the pennant in 1962, took the Series in 1963 and 1965, and lost to Baltimore in the Fall Classic in 1966. After that, Koufax retired, Wills and outfielder Tommy Davis were traded, and the Dodgers needed several years to regenerate their talent base.

Leavy looks at those teams mostly through the perspective of seven players - Wills, Koufax, Davis, Wes Parker, Jeff Torborg, Dick Tracewski and Lou Johnson. That's an interesting mixture of players - from stars to subs. All but the reclusive Koufax were willing to talk at length about those Los Angeles teams.

The games mostly take a back seat to the people here, which is a good idea in a book about a team from more than 50 years ago. Wills grew into a team leader on and off the field, but along the way would barely make a peep about what he sought at contract time. Parker, the son of rich parents, apparently had what looked like an easy life - except that his family life as a youth was a nightmare and baseball was his way of escape. The two life stories of the two Dodger infielders are at the center of the story. Torborg and Tracewski were mostly backup but provide plenty of insight here, while Johnson remains a fun character to this day.

Even so, Koufax might be the most fascinating person in the narrative, even from the distance of second-hand information. He was (and still is, no doubt) intelligent and well-rounded, but far more competitive and proud according to teammates that the outside world might have thought. All were in awe of what he was able to do with an arm that seem to degrade with every pitch.

There are plenty of stories here about Dodger management, which for the most part center on general manager Buzzie Bavasi. The franchise was a money machine in those days, and Bavasi was in charge of keeping it that way. He was a man of contradictions - someone who would lend a hand to a Dodger down on his luck one minute, and then pull deceptive negotiating methods the next. It's interesting, though, that Walt Alston, the team's manager barely comes up in the discussion. It sounds like he didn't make much of a footprint, although someone had to be pressing some buttons correctly for the team to do well.

The book has the subtitle of "The Collision of the Turbulent Sixties and the Los Angeles Dodgers." It's difficult not to touch on the surrounding events of the Sixties when writing about any part of it. The players were visible at a time when Vietnam and civil rights were becoming major issues throughout the country, and had to be careful expressing viewpoints while working for a quite conservative business. Internally, the baseball players union more or less started in the 1960s once Marvin Miller came aboard, and that changed everything - although not during the Dodgers' run. Those events, though, take a back seat to the team itself.

Leahy jumps in with a couple of strong opinions along the way. He believes Wills should be in the Hall of Fame, and that the Dodgers handled Koufax's arm problems terribly. Both are very defensible positions. In fairness, Wills' addition of speed to the game changed baseball, but may not have had the long career that is the usual prerequisite for a trip to Cooperstown. It's always tough to judge the revolutionaries in that context. Hindsight is 20-20 with Koufax, and there's no way he would be treated the same way medically now. But it wasn't uncommon in the mid-Sixties to work a pitcher on two days rest when someone thought it was necessary, and complete games were much more common. We're all learned a lot on the subject of arms since then, even if there's still some mystery about it.

This is a fairly long book at more than 450 pages, but the material is frequently fresh and almost always interesting. "The Last Innocents" won the Casey Award as the best baseball book of 2016. I haven't read all of the nominees, but my guess is that this one is a very worthy winner.

Read more about this book.

Be notified of new posts on this site on Twitter @WDX2BB.
Posted by Budd Bailey at 12:16 AM No comments: