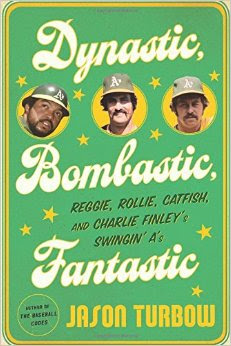 It's a group that won three straight World Series titles from 1972 to 1974 inclusive. That means they won six straight postseason series, which was a record at the time. They did it in a unique way too, fighting with the owner and fighting with themselves. The former was legal and financial, the latter was more physical.

Some of the stories spilled out into the public, where the media was more than happy to pass them along. You could almost see the heads shaking as the information got distributed. But we didn't know everything.

It took a while, but it's nice to get the whole story in one place now. That's the job Jason Turbow does in "Dynastic, Bombastic, Fantastic." Plenty of books have covered this era in one form or another, but - without reading them all - my guess is that this is the best one.

The Athletics would have been an interesting story even if they sang songs together around the campfire. The franchise spent a great deal of money on prospects in the late 1960s, as owner Charlie Finley tried to end a skid that dated back for decades. Not every dollar was well spent, but Finley's money went to enough good causes to make it work.

The A's, as Finley liked to call them, had quite a cast of developing stars and solid workmen. It was headed by Reggie Jackson, a fabulous talent who carried some baggage along in terms of ego but was kept under control by teammates who had been with him since they were all in the minors. Jim "Catfish" Hunter recovered from a shot to the foot to become a Hall of Fame pitcher. Rollie Fingers found his niche in the bullpen, providing another ticket to Cooperstown, He probably received more publicity for his distinctive mustache than his pitching. Joe Rudi was called "underrated" so often in his day that someone once said he should be simply "rated" - because we all knew how good he really was. Then there was Vida Blue, who when good was very, very good and had a name so lyrical that, as sportswriter Jim Murray once said, made you want to go home and yell at your parents for naming you Jim.

The other guys on the roster may not have gotten the attention of the others, but were pretty good too. Sal Bando was the glue of the team, Bert Campaneris was the sparkplug, Billy North added speed and defense, Dick Green was a defensive wizard, and Ken Holtzman was a dependable starter. Yes, they didn't get along so well at times, but they were united by a hatred of Finley. As Turbow recounts, it was always something new with Finley. Not only was playing for the Athletics of that time frustrating and maddening, but it was also exhausting. Finley appreciated his femployees, but only on his terms. When crossed, the owner could be petty and bizarre. Like most bullies, he tried to get his way all the time - and he roared (and sued) when he didn't.

Finally, Finley's stubborness proved to be past of the reason for his downfall. He didn't honor a contract with Hunter, and thus lost him as a free agent to the Yankees. The reserve clause soon passed away after that, and Finley couldn't come close to afford what it would take to keep the team together - particularly with the shoestring organization that he had put together around the team. The pieces soon scattered with the wind.

Turbow talked to as many members of those teams as he could, getting an impressive amount of people to look back. Their memories can be a little rough in terms of language. On the other hand, it's tough to picture the little ones even picking this story up. The author also does a nice job of putting the story together without too many details of the games. Yes, some moments of the big playoff games get highlights, but with the hindsight of around 45 years, they are less important than the stories about the principals and their personalities. The story moves along nicely.

"Dynastic, Bombastic, Fantastic" has more than enough going for it to keep just about any baseball fan entertained by a unique story line - especially if you are old enough to remember the story. And if this group remains your favorite all-time team - which probably hits quite a number of people in the Bay Area - do yourself a favor and buy this book right now.

Be notified of new posts on this site via @WDX2BB.
Posted by Budd Bailey at 12:27 AM