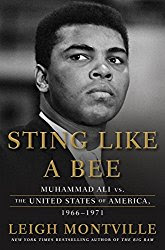 Ever since Leigh Montville stopped writing newspaper and magazine articles and started writing books, you can never tell what he's going to work on next. Let's see - there have been books on Babe Ruth, Dale Earnhardt Jr., Ted Williams, Evel Knievel, and Manute Bol among others.

This year, he's added another interesting choice to the list. Admittedly, forests could have been spared if Muhammad Ali hadn't come around when he did. All sorts of books have been written about him over the years. It's hard to turn away from his personality.

But this is different. Montville opts here to write about the time when he had an epic fight with the United States government over his draft status. That's a big part of the Ali legend at this point, but it's not a particularly well-known story. That's why "Sting Like a Bee" is a useful addition to the library.

For those of you too young to remember, Ali really did shock the work when he defeated Sonny Liston for the heavyweight boxing title in 1964. Then he did it again the next day by announcing that he had joined the Nation of Islam, a controversial Muslim group. Ali eventually changed his name from Cassius Clay. To say this all was unpopular would be a great understatement. Put it this way - most people thought the reputation of the boxing championship was tarnished - and Liston was known to be under the influence of organized crime. Plenty of people refused to call Ali by his new name; you'd think it would be easy to respect someone's personal wishes in this department.

Ali zipped through the heavyweight division's contenders, with his only roadblock being the draft board. After flunking an intelligence test, the military opted to reclassify several people by taking them into their ranks and giving them special training. Suddenly Ali was 1-A, and he claimed that his religion would not allow him to fight in Vietnam. Besides, Ali added, the Viet Cong had never discriminated against him. (His language was more colorful, but you get the idea.)

Montville gives the blow-by-blow account of the legal battle over Ali's status. There are a variety of stops and starts, but a key side issue was that Ali lost his boxing license once he refused induction - thus taking away his right to earn a living while he was fighting the case in court. It's a strange tale for the author - a book about a boxer without a heck of a lot of boxing along the way. Ali's journey almost is more of a legal expedition, as lawyers keep looking for a way for Ali to avoid military service.

The author makes a great point when he writes that as the Vietnam War became less and less popular, Ali's defiance became more and more mainstream. He eventually won his case to get his boxing license back, and fought a couple of times before the epic bout with Joe Frazier. Right after that, Ali won his case in the Supreme Court - and as Montville reminds us, he won it mostly because the Court Justices worked hard to find a legal loophole so that Ali wouldn't become a martyr in jail.

Montville did lots of reading about Ali and the Nation of Islam, and he sought out all sorts of people who played some sort of role in the story. The author even gets a lot of material from Ali's second wife, although some of it feels like it's from a different book in terms of content. Some of the twists and turns weren't particularly well publicized at the time, so it's good to catch up with it here.

There is one stumbling block here, and it's a good-sized one in terms of some readers' enjoyment of the story. There is plenty of legal stuff here, and it's quite dry. Montville includes quite a bit of legal testimony and documents verbatim, and it's hardly brisk reading. And that's an odd combination with Montville's wordy writing style, which can be a little tough to navigate if you aren't used to it. Ali certainly doesn't come off as a saint here either, mostly because of his wife's comments. That may not please the big fans, and disillusion others.

"Sting Like A Bee" is a good addition to the Ali library, filling in a literary gap. I'm just not sure it's going to work for everyone; I've read most of Montville's books (and loved him as a columnist) so I'm a little biased. If you are willing to put up with the lack of fun and excitement in a book about a fun and exciting public figure, dive in and receive an education.

Be notified of new posts on this site via Twitter @WDX2BB.
Posted by Budd Bailey at 10:30 PM