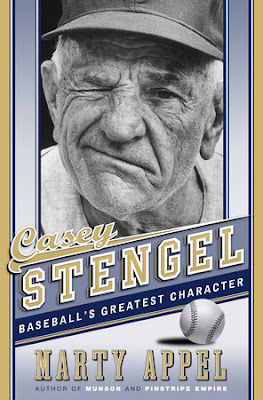 That might sum up the life of Stengel. Marty Appel uses those words and many more in his new biography of the legendary baseball figure, "Casey Stengel - Baseball's Greatest Character."

Appel, also known as George Steinbrenner's first public relations director with the New York Yankees, is well-qualified to try to put a picture of Stengel together. He's written several books on baseball, and obviously has plenty of contacts through the Yankees' history and through baseball to make this work in an entertaining and comprehensive style.

Stengel's real name was Charles, but he was from Kansas City - and he picked up the name Casey (as in K.C.) along the way. Stengel always preferred baseball to school work, and dropped out of high school a little early to sign a professional contract. And why not? His starting salary was twice what his father was earning.

Stengel wasn't a bad player, reaching the majors and bouncing around through a few teams once he got there. It included six years in Brooklyn and three with the New York Giants; Casey liked playing on the big stage that New York offered. Stengel also displayed an ability to be entertaining. The sportswriters would call it "colorful" or say he was a "real character." Whatever you call it, Casey was the type of guy who once reacted to a greeting at the batter's box by taking off his cap - and having a sparrow fly off his head. You don't see that today.

Stengel played 14 years. Baseball-reference.com's list of comparable batters has him as a close match to Cleon Jones - who signed with the Mets when Stengel worked there. He had a habit of turning up at historic moments - like hitting the first home run in Ebbets Field in Brooklyn, or hitting the first home run in a World Series in Yankee Stadium.

After finishing his playing career, Stengel started to work off the field - and provided a laugh-out-loud moment in his book right away. He was named the president and manager of a minor-league team in Worcester. Soon he was offered a job as a manager in Toledo, but the franchise owner in Worcester didn't want to let him take it. So Casey the manager wrote a letter to Casey the president, resigning from the position. Casey the president wrote back with "I join the fans of Worcester in expressing our appreciation for your outstanding services rendered and wish you luck in your new position. We congratulate Toledo on getting your valuable services."

Stengel managed for several years in the majors, guiding Brooklyn and the Boston Braves in the 1930s and early 1940s. But he only had one team play above .500, so no one thought of him as a genius. But Stengel still landed the Yankees job in 1949, and promptly won five straight World Series title - which has never been matched. It's funny how smart he got when he had good players. Joe Torre had a similar experience in the Bronx, as he guided the great Yankee teams in the late 1990s after having little success as a manager beforehand.

Some loved Stengel, and some disliked him. The sports writers and the public generally loved him, though, building up good will. He could be unconventional as a manager, pinch-hitting for players in the second inning and making odd decisions with the pitching staff. But generally, they worked out pretty well.

Appel barely touches on one part of the Yankees' story in the 1950s, which is race. The Yankees didn't integrate the major league roster until 1955, well behind most other teams. That would seem to be a sign that Yankee scouts weren't in a hurry to add African Americans to the roster, although a couple of anecdotes indicates that Stengel didn't have any problems with an integrated roster.

Stengel took a year off after the Yankees ordered him to retire after the 1960 season, and then turned up as the manager of the New York Mets. The expansion team wanted some attention, and Stengel certainly could provide that. The Mets soon outdrew the rival and much better Yankees. But New York's Mets were a terrible baseball team in those early years, one of the worst in history. It's easy to wonder if Stengel was the right man for that job in a baseball sense, and if the Mets were mismanaged in their first few years of play. Those issues go generally unexplored here.

Appel did plenty of research, and comes up with some facts that must have taken some digging to find. He is helped in his task by using portions of an unpublished autobiography by Stengel's wife, Edna. Written in 1958, the tales from that do help illuminate Casey as a complete person - one who was drawn to the spotlight, unable to pull away in spite of his wife's wishes in that area. There are a few moments in the book where the story becomes a little choppy, but for the most part this is an easy lift to read.

Appel also obviously is very fond of Stengel as a character, and it's tough not to be. Any criticism of the subject is rather gentle, and quickly offset by warm words. For those who don't know why we still remember the legendary figure so well, "Casey Stengel" fills in the gaps well.

Be notified of new posts on this site via Twitter @WDX2BB.
Posted by Budd Bailey at 12:44 PM