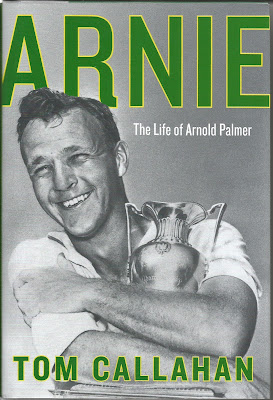 The year 2016 was a tough one for sports icons. We lost Muhammad Ali, one of the best boxers ever and a man who influenced world culture. We lost Gordie Howe, a simple, down-to-earth guy who, depending on your standards, is one of the finalists as the greatest hockey player.

And we lost Arnie. You didn't need to be a golfer to know that we're talking about Arnold Palmer, one of the most important players in the sport's history.

Palmer might be an example of the "right man at the right place" school of history. He turned professional in the middle of the 1950s, when Americans had more leisure time and were using it to play more golf. It was also when television started to influence American culture, and Palmer was perfect for that. You can tell by the photographs out of that era that Palmer was "cool" - Steve McQueen with a driver.

Palmer loved to compete, and was never afraid to take risks in search of victory. Sometimes it didn't work, and you could see his expression turn briefly sad. But when it paid off, the smile lit up the golf course. The crowds noticed that, of course, and loved to follow him. They turned into an army - "Arnie's Army."

Palmer had a great run of about 10 years in which he was winning major championships or in contention for them. His biggest problem was that Jack Nicklaus came along in the early 1960s, and Nicklaus could play. He turned out to be the best ever. (Almost the same thing happened with Phil Mickelson and Tiger Woods.)

For a few years, Palmer and Nicklaus had what the other wanted - Palmer wanted to be as good as Nicklaus on the course; Nicklaus wanted to be as beloved as Palmer was with the public. That made the relationship a little frosty for a while, but they were both smart enough to figure out that they had a lot more in common than they had differences. Palmer spent a lot of time making money and making friends, and he admits that probably hurt his golf game. But, as the book mentions, on a personal level it was a good trade.

Palmer was very good at making money, but he was better at making friends. Yes, he was "Arnold Palmer," but was friendly to everyone in sight. Arnie answered his mail, signed endless autographs, chatted with young players, sat through countless interviews, and at the end no doubt posed for hundreds of selfies. And he seemed to remember everyone along the way.

Here's a story from the book that shows what he was all about. Two soldiers from Vietnam, Jeff and Wally, sent a note to Palmer asking if he could send them some sand wedges and balls so that they could practice bunker shots. Palmer sent them right away and enclosed a personal letter. Months later, they both returned home safely. One went to the Western Open in Chicago and found a way to thank him in person for the gesture: "I'm one of the guys you sent sand wedges to in Vietnam." Palmer's response: "Are you Jeff or Wally?" He remembered their names. Unbelievable. But that was Arnie.

Callahan arranges the chapters by year, and the story is in somewhat chronological order. But it's more of a jumping off point for anecdotes about Palmer and his accomplices over the years. There are times when when it's easy to wonder in the text, "How did we get here?" But Callahan gets back to Arnie soon enough, and tells another story about him.

The pages of "Arnie" go by quickly (it's 250 pages of text, plus a long appendix), and you are sure to laugh a little and cry a little along the way.  This isn't a definitive biography, but it sure shows why so many people loved him. That makes it worthwhile.

Be notified of new posts on this site via Twitter @WDX2BB.
Posted by Budd Bailey at 1:54 PM