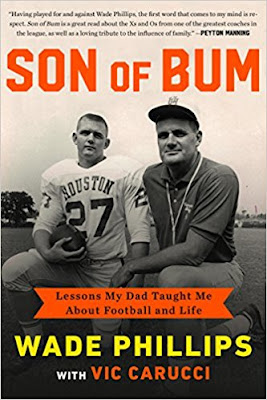 By Wade Phillips with Vic Carucci

The word that comes to mind when reading "Son of Bum" is ... curious.

Let's start with the basics. Wade Phillips might be the most well-known assistant coach in football these days. That's sort of like being a well-known spy, another profession not known for publicity-seekers. (Although there have been a few coaches who don't shy away from cameras.)

That's certainly in part due to the fact that he served as a head coach in a few different cities, including Buffalo and Dallas. Phillips also has a good reputation for putting solid defenses together wherever he's gone. And being a football coach, an occupation that keeps moving van companies in business, he's gone to a lot of places over the years.

But at the start of his football career, Wade was mostly known as the son of Bum Phillips. For the young readers out there, Bum put together some really good Houston Oilers teams in the late 1970s. The problem was that the Pittsburgh Steelers - the Steel Curtain Steelers - were always in the way.

Bum was loaded with personality, and he captivated the city of Houston with those teams. But that Phillips never could get over the hump, lost his job as a result, and moved to a much worse situation in New Orleans. Bum built up a decent team with the Saints, but eventually departed like most coaches do.

Wade is an entirely different personality. He received plenty of credit for his work in the Super Bowl win by the Denver Broncos in Feb. 2016, when he was the defensive coordinator. It was a nice reward for more than 30 years of good work in the NFL. Wade always came across as relatively serious, and someone who said what he meant without much flair. People like that don't often have books published.

The book is subtitled "Lessons My Dad Taught Me About Football and Life." That's true for most of the first half of the book. Bum frequently had Wade on his coaching staffs when the son was just getting started in the business. At times it seems as if Wade is more concerned with telling about his dad's approaches and experiences than his own. Since Bum wrote a book of his own in 2010, it's easy to wonder about how this might work. But Wade's affection for his dad certainly is evident right from the beginning, and certainly Dad would be proud of his son's reputation around the league at this point.

Once Bum leaves the NFL, Wade sticks to his own lifestory. It's covered relatively briskly, without spending too much time on individual games. The most interesting stories of the book probably center on switches in jobs over the years. Phillips has a lot to say about a pair of NFL owners with completely different personalities - Jerry Jones of the Cowboys and Ralph Wilson of the Bills. I'm fond of saying that teams usually lose for a reason, and Phillips' comments about what it was like to coach under Wilson back up that statement. Phillips' exit from Buffalo was a strange one for all concerned, and the Bills haven't been to the playoffs since he left almost two decades ago.

One game does get a little extra coverage in these pages, and it's that Super Bowl win. There are a few good stories from that day, and it's obvious what a personally satisfying moment that was for Phillips.

Otherwise, the veteran coach spends just a little time dealing with the X's and O's of the business. The terminology of pro football can be intimidating, even to those who follow the game fairly closely as fans, but there's little here that will stop an average football fan in his or her tracks. This is also a pretty quick read, which is appropriate.

I won't give this a rating, as coworker and friend Vic Carucci worked on the book with him. The two have put together a book that won't intimidate many, but will instead give a fairly good look at a straight shooter. Those seeking to learn about a man and a profession that usually is closed to the public will pick up some insight with "Son of Bum."

Be notified of new posts via Twitter @WDX2BB.
Posted by Budd Bailey at 12:50 AM