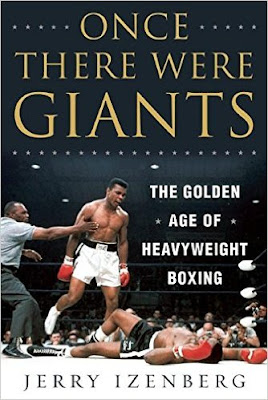 Quick - name someone who is one of the heavyweight boxing champions of the world.

Maybe it's because the people running Ultimate Fighting and Mixed Martial Arts know more about marketing, especially in a world where they control the entire business. Maybe it's because people figured out there are easier ways to climb out of poverty.

Maybe it's a combination of all of the above.

In any case, it wasn't always like this. Once upon a time, the heavyweight champion was a major celebrity who was considered the toughest man on the planet. Come to think of it, it wasn't that long ago where that was the case - only a quarter of a century, a blink as these things go.

Veteran sportswriter Jerry Izenberg was around for the glory days of the heavyweight division. He apparently was at most of the big fights, and knew the champs and contenders personally. Izenberg empties out the memory book with "Once There Were Giants."

The author warms up for the assignment with a chapter on the history of the relationship between boxing and organized crime. The connection goes back to the start of the 20th century, according to Izenberg, but grew in importance in the 1930s and may have peaked in the 1950s. Fixing the results certainly happened, but the easiest way to influence the sport was through shady deals in management and curious matchmaking. In other words, connections were more important than victories in getting a title shot.

The last of the heavyweight champions to have obvious mob connections was Sonny Liston in the early 1960s. It speaks volumes that some people thought the heavyweight title dropped in class when it went from Liston to Muhammad Ali, who announced he had joined the Black Muslims right after beating Liston. Everyone seemed to be afraid of that group, even the syndicate.

The roll call of champions from there is pretty impressive. It includes Joe Frazier, George Foreman, Larry Holmes, and Mike Tyson. Even the contenders and the brief champions were at least interesting - Ken Norton, Leon Spinks, Earnie Shavers, Ron Lyle, etc. Once Tyson's career blew up, partly because of self-inflicted wounds, things haven't been the same. Evander Holyfield and Lennox Lewis haven't faced enough quality opponents for them to qualify as anything close to all-time greats.

Izenberg has plenty of good stories about the greats and near-greats. For example, the author writes that Frazier was something of a one-trick pony for most of his career in the form of a great left hook. However, Frazier had a surprise for Ali in their legendary third fight. He had been discreetly working on developing a punch with his right hand. Frazier shocked Ali with that new skill, and it turned the fight into a classic.

There's some good material here. Izenberg knows his boxing, and his version of events generally feel authentic. He also has some funny lines along the way, and that does wonders for making the story more fun.

On the minus side, this is a mighty quick read - and would have been even quicker without the tales of organized crime that don't feel like it's a good fit with the story. Izenberg also could have used a little more cleaning in his editing. A few facts and incidents get repeated along the way.

"Once There Were Giants" comes across as an entertaining enough package - maybe not a book you'll save forever, but enjoyable along the way. I'm in the sweet spot for the target audience, naturally. The catch comes for those who are too young to remember the principals here. They probably won't be interested enough to pick this up in the first place. But their dads might.

Be notified of new books on this site via Twitter @WDX2BB.
Posted by Budd Bailey at 11:57 PM