Review: One Nation Under Baseball (2017) 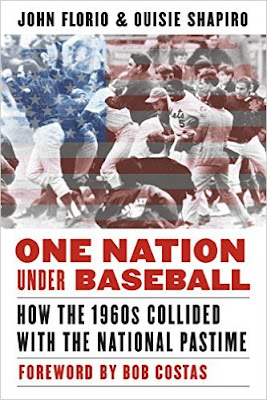 By John Florio and Ouisie Shapiro

You have have heard that America sort of blew up in the 1960s in any number of ways. All sorts of changes came to the country, and they were packed into the decade. It was hard to keep up with the way the rules seemed to change by the hour.

In contract, the game of baseball remained relatively unchanged. People who had come from 1895 in a time machine still would have recognized it in 1965 - nine innings, three outs, and so on.

For some, that was good. They could go to the ballpark and see decades of tradition on display. Heck, most of the players weren't allowed to wear long hair, so every day was turn back the clock day in that sense.

But there were all sorts of changes taking place in the game, even if they might have been relatively subtle. Looking at the decade in that sense is the premise of "One Nation Under Baseball."

After an excellent introduction by Bob Costas about how important and interesting those changes were, authors John Florio and Ouisie Shapiro jump right into a fascinating anecdote from pitcher Jim Grant. He was in Detroit in 1960 on a road trip when he got a call from aides of Senator John F. Kennedy, telling him that the Presidential nominee wanted to have breakfast with him the next morning. It took some convincing, but Grant did make it down to the hotel restaurant for breakfast. The two men had a frank conversation about civil rights, and Grant was impressed that Kennedy bothered to seek him out.

And away we go through the 1960s, covering a variety of topics and presenting some stories. Some are familiar, but several are pretty fresh because of interviews done just for the book - even from the perspective of about 50 years later. That helps make it at least interesting.

Even so, this bogs down a bit in relatively short order. The baseball stories will at least interest those picking it up, but the book goes in a variety of other directions. Before we know it, we're reading about a New York City newspaper strike, or the Beatles, or Muhammad Ali, or New York major John Lindsay. In addition, some times the stories don't match the overall theme of changes in society changing baseball. There's a portion of the book on the 1969 New York Mets, who pulled off one of the great surprises in baseball history by coming from nowhere to win a World Series. Forests have been sacrificed to tell that story, but it doesn't seem like a particularly good fit in this book. Denny McLain's 31-win season gets a look here, but it's hard to figure out where that fits in with the narrative. At least we can guess why he never came close to repeating that big season (arm issues were bothering him by the end of 1968).

What's more, I'm not sure all of the anecdotes go anywhere. We see how the road to free agency started, and how the sport became more color-blind, but there isn't much analysis given along the way. I would guess that most people picking this up might not want to read a sociologist's view of baseball, but this went a little too far in the other direction. Even a final chapter summing up what had happened would have been good.

The bibliography here is very impressive, and it's almost surprising that the authors got this down to only 200 or so pages of text. "One Nation Under Baseball" will at least interest those who want to learn more about the Sixties, but they might be disappointed that there's not more to the story.

(Footnote: I found out after writing this that Shapiro was one of the interviewed people in the fine HBO documentary on the Boston Red Sox of 2003 - revised after 2004.)

Be notified about new posts on this site via Twitter @WDX2BB.
Posted by Budd Bailey at 11:20 PM

Labels: Review: One Nation Under Baseball (2017)