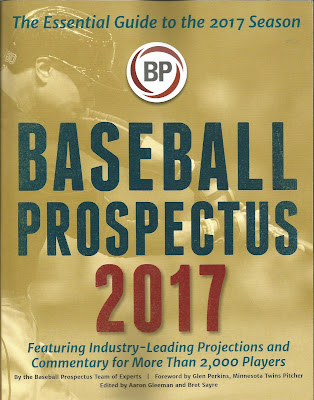 I've been reading and reviewing the Baseball Prospectus for more years than I can remember. That means I might be running out of things to say.

The constant is that I really wouldn't want to start following the baseball season without reading what the experts at BP have to say.

The 2017 edition is out, and as usual it's full of worthwhile information. This year's book checks in at 576 pages. That's an enormous project to finish in an offseason, considering how much information is included. It takes a big, talented staff to turn that around, and BP obviously has that.

The format follows the usual pattern. Each team gets an essay - usually different from what you might read elsewhere, but generally an interesting take. Then comes a description of player after player after player. I guess they always miss a few players who had an impact on the season to come, but very few. The basic statistics are there along with some other "new age" numbers. If you are new to the book, it will take a little time to TAv and WARP, but not long. Those new readers also should know that the stats don't go back very far (2014/2015/2016). I saw a comment on amazon.com complaining about that, but it's not a record book designed for that purpose. This year's book adds some fancy stats for catchers. It's nice information to have if you study such stuff. Finally, there are a few essays in the back on general baseball topics, plus a ranking of the top 101 prospects in the game.

The writing is good and sometimes quite funny and fresh. It certainly feels like the player comments are a little more upbeat now than they used to be. Few players are out and out trashed, and the guys who have a chance to hang around a major league roster seem to get a little more respect than in past years. The authors seem to know what they are talking about; many wind up in the front offices of major league organizations. The book has started to print each team's BP alumni.

Again, I tend to stick to the major league players when reading it at this time of the year, and then refer to it during the season. Otherwise, I might be reading straight through until May. If my favorite teams make a trade, especially involving some prospects, I go straight to it for reference. Sometimes I'll even grab it while watching a game, especially if unfamiliar teams are playing. It increases my interest.

I'm not sure how many ways I can say "if you are a big baseball fan, you should be buying this." But it is true. I might not bother to say it next year, but that doesn't mean you shouldn't do it.

Be notified of new posts on this site via Twitter @WDX2BB.
Posted by Budd Bailey at 4:25 PM