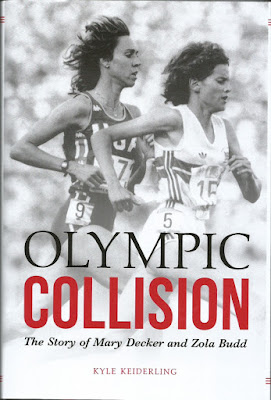 It's another one of those "time flies" stories.

For those of us who were paying attention in 1984, a track event at the Olympics in Los Angeles was highly anticipated beforehand, and highly scrutinized afterwards. That doesn't happen very often.

Here we are, 32 years later, and much has changed. But the story of Mary Decker and Zola Budd still carries some fascination. Their tales, which have connected a few times over the years, drives the book, "Olympic Collision."

Author Kyle Keiderling, in this well-done summary of the two runners' careers, puts the '84 Olympics right in the middle - as well he should. Decker was one of the stars of the U.S. team that year. She was coming off an amazing year and was considered one of the favorites in Los Angeles at the 3,000 meters.

Adding some drama was Budd, a South African who had been barred from the Olympics until she took advantage of a loophole in the rules to run for Great Britain. (She was, more correctly, asked to take advantage of that loophole by those who sought to profit by it - family, coaches and business interests.) Budd came out of absolutely nowhere to join the list of world-class runner at the distance, barefoot and shy.

In the Los Angeles Coliseum that fateful, Budd had a small lead on Decker when the two bumped into each other, and Decker fell. She suffered an injury and couldn't get up. Budd continued on but was showered with boos by the pro-American crowd and essentially gave up. Decker blamed Budd for the collision, while the timid and devastated Budd simply headed home. Experts watched the video of the race very, very closely in hopes of assigning blame, but the consensus appears to be that no one really did anything wrong.

The personality differences couldn't have been much greater. Decker comes off here as extremely driven, and not particularly well-liked or likeable. She ran from the front and took command, but she was also hard to coach and her style took its toll in terms of injuries over the years. She spent more time in an operating room that some surgeons. Still, Decker probably is the greatest woman's middle-distance runner in American history. Perhaps the best comparison of her ability would be with Ron Clarke, the great Australian runner from the 1960s who is known for setting records but falling short of gold at the Olympics.

Budd comes off here as running from something rather than at something - from sadness over the death of her older sister, from anxiety caused by an uncomfortable dynamic within her family, from outsiders telling her what to do. She comes across as someone who would have been happy to run in South African races, and then head home to play with her pets.

The stories have different endings, too. Decker, who became Mary Decker Slaney after marriage, tried to compete for many more years, but injuries usually got in the way and a conviction on a failed drug test effectively ended her competitive running days. Budd serves as a college coach in, of all places, South Carolina.

Keiderling certainly did his homework here. He talked to many people who were involved in the 1984 race, as well as others who have played a part in the lives of the two people. Budd talked at length to the author, which probably helped her receive a more sympathetic treatment in the book. Decker declined to comment at all. Based on the comments presented here, some people weren't too upset that Decker had some humbling times - especially since they suspected her of drug use before the '84 Games. The story does bog down a little along the way as race times are recited, but it's tough to avoid that.

While track fans are the obvious target for "Olympic Collision," the book shows us that one false step can change the lives of people for good. Budd's story seems to have a happy ending. Decker's legacy is much more confusing. And who would have seen that coming?

Be notified of new posts on this site via Twitter @WDX2BB.
Posted by Budd Bailey at 8:51 PM