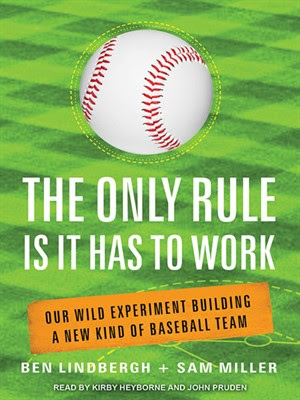 By Ben Lindbergh and Sam Miller

The battle in baseball front offices has been going on between old-time scouts and executives and young analytic experts who think the truth is in the numbers. The analytic people are probably winning, based on numbers like OPS and WHIP crawling into the mainstream conversation.

But there's still some tension there. It could be summarized by one question: "Would you give the analytics side the keys to the car?" In other words, would they be good with complete control of the baseball operation.

Ben Lindbergh and Sam Miller decided to try to find out.

The two Baseball Prospectus graduates talked the owner of Sonoma of a California independent league - just about at the bottom of such groups as these things go - into letting them take charge of the baseball decisions. They kept a diary of their experiences, and the result is "The Only Rule Is It Has to Work."

Lindbergh and Miller got some help along the way. They picked up some software that could help determine a variety of on-field factors, like velocity on contact. They also were sent a database that included players who had excelled in college but had not been picked in the draft for one reason or another, thus making them potential candidates for employment with the Stompers.

The authors also had a few tricks up their sleeves. Eventually they shifted defenses much more teams at that league usually do, and they tried such tactics as a five-man infield in certain situations. Actually, they worked pretty well as these things go. But along the way, there were "spirited" discussions with the manager, who knew what had worked for him over the years and who wasn't about to change because a couple of kids in jeans told him to do something different.

It's tough to say whether this approach was a drastic improvement over the status quo, mostly because real life got in the way. Independent league teams aren't the majors for a number of reasons. Players take off early to register for fall semesters of college, or they are scooped up by other teams in different parts of the country who can pay a little more. But for the most part, Sonoma did fine, and Lindbergh and Miller were generally accepted despite some gimmicks.

While the analytics stuff is what might draw many people in, the charm of these leagues are going to be a big selling point to a lot of people. These are players, for the most part, who are postponing the end of their childhood for a year in a sense, giving it one more chance to find out if they can play baseball for a living instead of buying a suitcase and trudging off to the office. They become, in most cases, easy to root for. It will be fun to see what happened to them all when the paperback edition comes out in 2017.

At first glance, it's tough to make the reader care about a pennant race that few care about. Even the players are using the team as a potential way-station toward something better. But Lindbergh and Miller care, and care a lot, about wins and losses, and that will rub off on many.

The book found its audience in no time; it seems those who like their numbers mixed with their baseball have loved it so far. Other baseball fans probably won't be attracted to it. That's fine; there are all sorts of entrances into the love of the game. "The Only Rule Is That It Has to Work" fulfills its main mission, though: as a book, it works.

Be notified of new posts on this site via Twitter @WDX2BB.
Posted by Budd Bailey at 3:44 PM