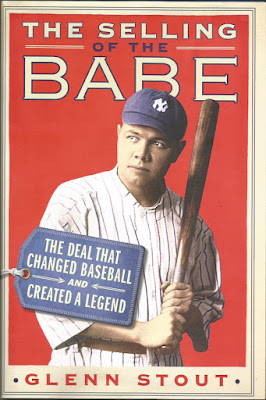 When Glenn Stout isn't busy organizing his annual collection of top sports writing, he veers off to do some research and writing of his own. Stout does mighty good work there too.

Many of his books have been keepers, including massive histories of major league teams such as "Red Sox Century" and "Yankees Century." Those two volumes make him well qualified to take a good long look at the biggest transaction in baseball history - and shoot down some myths about it along the way.

Has there ever been a bigger trade than the one that sent Babe Ruth from the Red Sox to the Yankees for cash? Probably not, considering the huge effect it had on both teams and the sport itself. While a little of the situation surrounding the move was covered in the two books mentioned above, Stout gives the situation an excellent book-length treatment in "The Selling of the Babe."

The standard version of the mythology surrounding Ruth is that a cheap Red Sox owner, Harry Frazee, sold Ruth to the Yankees in an effort to drag the Red Sox down while building up the theatrical end of the business. (There's often a reference to "No, No, Nanette," which brought the musical to Broadway.) Ruth arrived in New York and became a sensational hitter, popularizing the home run and curing the hangover caused by the 1919 Chicago "Black Sox" scandal. The Red Sox spiraled downward and started a championship drought that lasted 86 years.

Much of the story isn't true, and some is at least exaggerated. Stout points out that in 1918, when the Red Sox were on their way to a World Series title, Ruth was already a handful. He was wrapped up in his own interests rather than the team's, which meant contract renegotiations, leaving the team without warning, and binges related to alcohol or women. It's fair to call him a man of big appetites. But ... Ruth could pitch, setting a World Series record for consecutive scoreless innings, and he could hit when given the chance.

Ruth's hitting suffered in the second half of 1918, when Stout speculates that the materials used in baseball were subpar - World War I and all that - and weren't traveling as far when struck by a bat. Intuitively, that makes sense. When the quality of baseballs returned to normal in 1919, they may have remained a little tightly wound because fans had discovered that offense and general and the home run in particular were exciting to watch. That means people in the stands, which meant dollars in the pockets of the owners. The "Black Sox" scandal hadn't arrived yet, but baseball could see the future at that point, and better times were clearly ahead no matter what happened in Chicago. Ruth broke the one-season home run record while playing for the Red Sox in 1919.

So why trade him? Stout has a few factors entering into the equation. An obvious one that Ruth was still marching to his own beat, and it was tough to know if he'd self-destruct at some point. Less obvious was the fact that the Red Sox at that point were a relatively small-market team, sharing Boston with the Braves. Frazee knew that Ruth would eat up much of Boston's payroll if he stayed after becoming a drawing card that season.

More importantly, Frazee wasn't poor by any means but was in a difficult situation. He was renting out Fenway Park, and the building was not in good shape. Some of his financial assets were tied up in the theater, meaning at times they weren't liquid. Frazee also wasn't getting along with league official Ban Johnson, and there were other shareholders in the team complicating everything. The trade/sale of Ruth came with a hidden benefit - the Yankees gave Frazee a mortgage on Fenway Park, thus further solidifying his financial situation.

As for the trade, Ruth got to New York and became a sensation. The Yankees played in the Polo Grounds, with short distances down the lines that were perfect for a power hitter. New York didn't win the pennant in 1920, but became a regular participant in the World Series after that. The Yankees' ownership made enough money to build their own ballpark, something called Yankee Stadium, a few years later. It had a "short porch" in right that was perfect for Ruth. Frazee sold the Red Sox in 1923 at a hefty profit; Boston's dark ages began soon after that. "No, No, Nanette" started to become a license for Frazee to print money in 1924. The biggest losers in the deal were the Red Sox fans, who saw Ruth leave without the team receiving any help on the field.

Stout made the decision to rely mostly on the newspapers accounts of the time, since the myths surrounding the principals - particularly Ruth - have become part of the story over the years, even to some biographers. Ruth himself probably never even bothered to read some of the ghostwritten stories that were written under his name over the years.

It's all quite a story, and nicely told in a relatively short period of time (255 pages plus notes). "The Selling of the Babe" will appeal to just about anyone who likes baseball history served up with facts and intelligence. I'll bet the house that this book is nominated for a Casey Award as one of the top baseball books of 2016.

Be notified of new posts on this site via Twitter @WDX2BB.
Posted by Budd Bailey at 11:46 PM