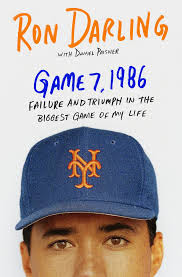 Many books about sports carry themes about heroic success stories, as men and women overcome great odds to become "winners."

And that's what makes it interesting.

The subtitle, "Failure and Triumph in the Biggest Game of My Life," tells the story enclosed in a few words. Those who were baseball fans at the time know exactly what that subtitle is about. But here's a quick refresher course.

The New York Mets trailed the Boston Red Sox, three games to two, in the 1986 World Series. Their hopes for a title appeared doomed when they rallied from a two-run deficit in the bottom of the 10th inning to pull out Game Six. That set up a Game Seven, the biggest moment of any baseball season.

Ron Darling was the man picked by the Mets' manager, Davey Johnson, to start Game Seven. Immediately, he started to feel the pressure, which was certainly multiplied by the circumstances of the Mets' Game Six rally - making a Game Seven win seem almost inevitable to some. This would be a Big Moment - for the pitcher, for the team, for the fans, for the city. Darling had pitched well in his first two starts of the World Series, but he well knew that there were no guarantees.

After thinking about it overnight after Game Six, Darling prepared to pitch Game Seven ... except that it rained. That pushed back the game a day to Monday night, and gave Darling another 24 hours to think about what was coming - which he admits he didn't really need at that point. It also gave the Red Sox 24 hours to put the events of Game Six behind them. Boston also had the chance to start Bruce Hurst in Game Seven, and he had dominated the Mets so far in the Series.

The game finally started, and Darling admits he was shaky at the start. In the book he goes over the game batter by batter, revealing what he was thinking at a given moment. He gave up back-to-back home runs in the second inning, and later gave up a third run. With no tomorrows, as the cliche goes, Darling didn't go deep into the game and was pulled with his team trailing, 3-0. That left him in the odd position of hoping his teammates bailed him out in a sense.

That they did, going on to rally to win the game. The celebration was a New York-sized one, naturally, but Darling writes how everything was a little tempered for him personally because he hadn't contributed as much as he had hoped. Yes, he had pitched well throughout the season and playoffs, and was a valuable member of the team. But Darling was in the middle of an unusual situation, and that's what makes the book work quite well.

While reading this book, a couple of times I turned on the computer to watch a tape of the game on YouTube. It's instructive to do so. At one point, Darling throws a pitch that appears to catch the bottom of the strike zone but is called a ball. The announcers don't mention much about it, but Darling writes about how upset he was at the time. If that's a ball, he thought, it's going to be a difficult, and short, evening for him. Darling is shown off the mound, rubbing the baseball with vigor.

There are some tangents along the way. Darling grew up in Massachusetts and was a Red Sox fan. He even played with Boston's catcher at the time, Rich Gedman, while growing up. There are a few stories about his Mets teammates and their antics as well. But mostly, this is about Darling, who many people today know through his fine work as an analyst for Mets' broadcasts and for national channels such as TBS. Pitcher is one of the loneliest positions in sports this side of hockey goalie, and this is a vivid demonstration about how even professionals are a far less confident bunch than the general public believes.

A little familiarity with a game from 30 years ago will help a reader's enjoyment of "Game 7, 1986." Still, the book's unusual approach ought to give it some degree of universal appeal. It's a quick, interesting read, and might help you think about the sport in a little different way.

Be notified of new posts on this site via Twitter @WDX2BB.
Posted by Budd Bailey at 2:00 PM