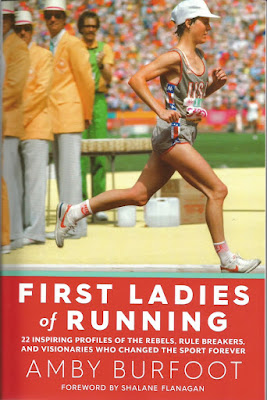 Change usually comes with resistance in any aspects of life. We tend to think at the time that progress is barely taking place in a given area. Then we look back a while later and think that it happened in a blink.

Such was the case when it came to distance running for women. The first American woman to run more than a lap around a track in a competition did so in 1959. By 1984, the first marathon in the Olympics for women took place. Twenty-five years is a generation, more or less, but a lot of attitudes had to change to get there.

There are a variety of ways to look back on such a revolution. A chronological story is the most popular approach, but personal histories work too. Amby Burfoot, a top writer in the world of running as well as a former Boston Marathon winner himself, has taken the latter approach with "First Ladies of Running." It's a worthwhile effort and read.

Back in the 1950s, women were considered too" delicate" to take part in races longer than a sprint. Besides, it wasn't lady-like to get sweaty. It was better, the thinking went, for women to stay home and raise a family than to get in good physical condition. A few pioneers, though, thought otherwise, and they ran for the sheer joy of it. Eventually, they saw men's races and asked, "Why not me?", and went on to revolutionize the sport.

Burfoot, who won the Boston Marathon in 1968, knew some of those pioneers personally. He interviewed several others for a total of 22 short chapters on women who made a difference. The stories at times feel like they are from a century ago instead of from the 1950s through 1970s.

There are some common threads that go through the stories. One is that it would seem that few male runners objected to females joining them on the roads. Many of the women profiled had stories about how men went out of their way to be helpful. One woman talked about how some men formed a human wall around a car, all with their backs to the inside of the car, so she could change clothes at a track. There was no women's locker room.

The biggest problem faced by the women were the attitudes of the male officials, who were older and more set in their ways. The best example of that happened to Kathrine Switzer, who while running in Boston in 1967 encountered unofficial race director Jock Semple on the course. "Get the hell out of my race," he barked in trying to take her race number away. Switzer's then-boyfriend gave Semple a body block and told Switzer to start running fast. By the way, I believe Semple and Switzer later became friends.

The women Burfoot interviewed all seemed quite smart and articulate about their experiences as well. Many runners are like that. Maybe it's all that solitary training which gives them time to think. But based on this book, every runner profiled seems like an interesting person. That helps the story quite a bit.

The chapters are rather bite-sized, which means the book moves along quite quickly. There is a little repetition, or at least similarities, in some of the experiences these women had along the way. That's probably unavoidable under the circumstances. Burfoot has a chapter at the end with updates on all their lives, as well as another section on those that just missed the cut for a full chapter. Both are good ideas.

Many of our sports have been around for a long time, so it's unusual to read about those who were around at the creation without going deep into the back shelves of a library. "First Ladies of Running" is a good reminder that running wasn't always so democratic when it came to women. They really have come a long way, baby.

Be notified of new posts on this site via Twitter @WDX2BB.
Posted by Budd Bailey at 3:25 PM