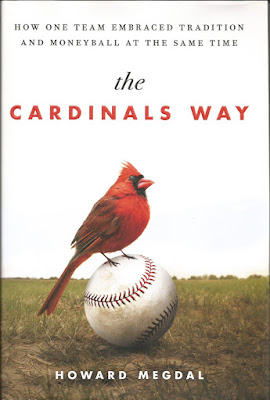 Just when you think there's been a book written about every single aspect of baseball, another volume comes along that breaks new ground.

That's "The Cardinals Way." (What, no apostrophe?) Most of the story is devoted to telling how the St. Louis Cardinals select and acquire young talent these days, with more details than you'll find on the subject in general than anywhere else.

Again, that's a majority of the story, but not the entire tale. That might influence your reaction to the book, as we'll see in a minute or two.

The Cardinals have been one of the most successful franchises in major league baseball over the years. They have won championships frequently enough to keep their fans happy, and then some. They've done in a market that may love their Cardinals but which isn't particularly huge. So the team has overcome some big odds to be as good as it has been over the years.

What's gone right? Author Howard Megdal starts a very close-up at the franchise with Branch Rickey, who was put in charge of the team several decades ago and installed several guiding principles that are still in place today. One was to play the game a certain way, and the franchise frequently has relied on such men as George Kissell, one of those baseball lifers who liked nothing better than to work with young players and help them improve. The testimonials to Kissell's work go back decades.

The scene shifts a little more than 10 years ago, with the analytics revolution was just starting to arrive in baseball. The Cardinals had been quite successful through that time; as of 2003 they were a year way from another World Series appearance. They hired the proverbial smart guy without a previous connection to baseball - Jeff Luhnow. In fact, he's was better known as the person who helped Lands' End sell jeans on line. Luhnow was essentially told to go in the corner and see what he could do to bring the operation up to date.

Luhnow hired a group of smart guys who quickly got up to speed on analytics, and then the discussions - I'd use arguments, although that might be a little severe - began. The scouts valued different qualities than the numbers boys, and eventually the analytics department's voice got louder and more influential. General manager Walt Jocketty, who had been quite successful with the old system, eventually left for the same job with the Reds.

John Mozeliak moved up from the job of assistant general manager, and he installed the hybrid system used today. The Cardinals listen to their scouts at draft time, and they also look at the numbers. Sometimes there's a little horse trading involved, but eventually a pick is made. You'd have to say it's working pretty well, since the Cardinals keep reaching the postseason. As for Luhnow, he jumped to the GM job of the Houston Astros, a team that had been at the very bottom of the sport but now ranks as a very promising team.

Author Howard Megdal got tremendous access into the Cardinals' organization to write all of this. Current and former employees, including owner Bill DeWitt, go over their thoughts at certain points in team history. Megdal even got to be in the "war room" on draft day, and hung out with team officials at spring training and at minor league games.

All right, does the book work? That I'm not too sure about. As the above description might indicate, the story does go in a few different directions without a particularly unifying theme. Meanwhile, there are few names of people that anyone but big Cardinals fans would know, which means players on the current roster come up only in passing. This can make some portions of it on the dry side. And the Cardinals' hacking scandal of the Astros' statistical database comes up late in the story, without much time to give perspective to what that all means.

There are some interesting elements swimming around in "The Cardinals Way." That may be enough to carry the story along for some readers. But it's easy to wonder just how big an audience the book will find.

Be notified of new posts on this site on Twitter @WDX2BB.
Posted by Budd Bailey at 12:28 AM