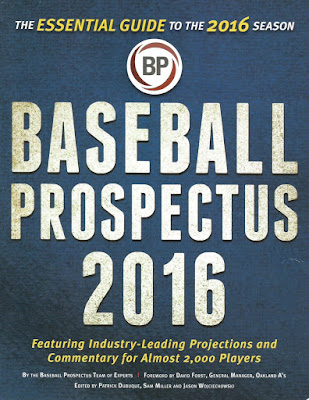 You have to give the people who put out Baseball Prospectus credit. They apparently listen to their customers.

Last year, those people made some changes in a book that had been widely successful with a certain segment of the baseball-loving community. The writing was still smart, and the comments were on target. But graphically, the new package didn't really work well. Some of it was simply hardly to read. It was also smaller than "normal" in terms of number of pages. It all wasn't enough to drive me away, but the danger signs were there.

Others had the same observation, and the word must have gotten out. This is back to the old normal, which is why it's been a favorite for more than two decades.

The formula remains in place. Each team has a chapter. It starts with an essay illustrated with some charts, and the words about the team are all over the map in terms of style and information during the course of the book. Most work well. Then every significant player in the organization receives a statistical box and some analysis. Yes, some of those boxes contain statistics that aren't found in your daily newspaper (although it's interesting that some writers usually things like WARP pretty casually these days). The end of each chapter goes over some other prospects; you'd probably have to be at a minor league game to care about most of them. Then there are a few paragraphs on each manager.

Finally, after 552 pages, you get to a few essays on random subjects. Then there's the popular list of the 100 top prospects in the game.

Want a complaint? Here's one. The cover got boring. Someone designed it in about 10 minutes. The others jumped out a lot more.

So what? If baseball is one of the biggest things in your life, Baseball Prospectus should be part of your life. Again. No extra-powerful eyeglasses are needed to read it this time.

Be notified of new posts on this site via Twitter @WDX2BB.
Posted by Budd Bailey at 8:19 AM