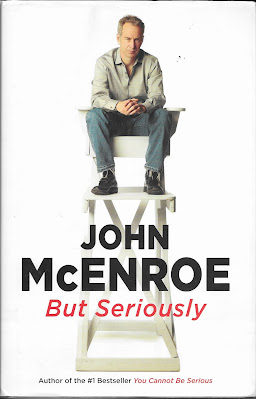 Sometimes sequels are a good idea. "The Godfather, Part 2" lived up to the reputation of its predecessor. "Top Gun - Maverick" by all accounts is extremely well done.

Sometimes they aren't. That brings us to John McEnroe's second book, "But Seriously."

The tennis champion had written an autobiography back in 2002, and it was fairly successful as these things go. McEnroe was always a complicated personality, especially by tennis player standards. We sort of knew that there was a first-rate mind lurking in his head. The problem that his public behavior, especially on the tennis court, could be less than impressive. But he made some efforts to calm down, and apparently he was successful at it. He found a good-sized niche as a commentator for tennis, and has stuck with it for a few decades now.

This book essentially deals with what his life has been like since that 2002 book came out. That statement raises an obvious question, with the answer come back as "not too much of interest."

We sort of get the idea here right away that this is not going to be a keeper of the book. McEnroe jumps into chapter one with a description of how he and his wife Patty Smyth met. The catch is that it's Patty doing the describing. It's usually not a good sign in an autobiography when other people do the talking/writing.

From there, McEnroe goes through aspects of his life from 2002 to the publication date of 2017. There are stories about how he hosted a couple of television shows, which didn't work out for one reason or another. Johnny Mac even discussed the possibility of hosting a morning-drive radio show in New York, but decided he didn't want to embrace that sort of lifestyle (good idea, John). There are a few chapters about collecting art. The artists that come up in the discussion may be well-known in certain circles, but it's easy to guess that tennis fans - who probably comprise most of the reading audience here - don't travel in those circles. Those chapters have little choice but to be boring to most. There are a few stories about rock and roll, which are OK but are mostly useful for name-dropping.

That means a good chunk of the 270 pages within the covers have little to do with tennis. This sounds like a less-than-ideal recipe to be crowd-pleasing. McEnroe devotes some time to his play on the senior tour, which is fine. He's been fighting off Father Time that way for years, and played such opponents as Lendl and Connors once again. It's almost too bad that the senior tennis tour didn't evolve into something like the Champions Tour in golf, where there is good competition, major championships, and a point to the activity. The tennis version is a nice exercise in nostalgia - entertaining but not significant. Of course, tennis takes more of a toll on the body than golf, which means golf can still be played at a relatively high level into middle age.

What's not covered too much is the actual tennis that was played in those 15 years. It was a rather fascinating time as these things go.  On the men's side, Roger Federer took charge - but soon was joined by Rafael Nadal. Then Novak Djokovic came along, and at last look the three of them are on the top of the list in major championships in a career. McEnroe has had a great seat for many of those wins, and he's at his best describing the play of those three great champions. On the women's side, Serena and Venus Williams did some serious winning as well during that decade and a half. You'd think he'd have something to say about all of it.

At least McEnroe's voice remains true. He's still willing to poke fun at Lendl and Connors, still willing to talk about his respect for Bjorn Borg, still willing to have a laugh at his own expense. That means it's relatively to navigate through this, even if some of the material feels recycled in spots.

"But Seriously" must have seemed like a good idea at the time, but simply didn't work out well. It would be interesting to know what went wrong. McEnroe remains an attractive personality, but this book never quite brings it to life. I guess someone broke his serve.