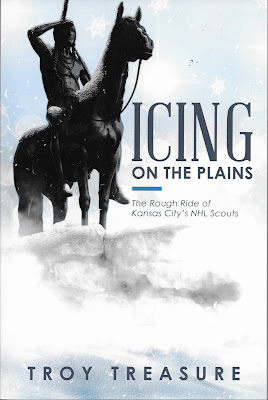 Once upon a time, the National Hockey League had a team in Kansas City.

You might have missed it. It was around for two seasons in the middle of the 1970s, and there was a lot going on in hockey. The NHL and the World Hockey Association were both fighting for survival, and teams tended to come and go a lot.

The Kansas City Scouts were first born in 1972, and started playing in the fall of 1974. Alas, they died in 1976. The Scouts moved to Denver for a while, and somehow the franchise couldn't make it work there either (the current success of the Colorado Avalanche shows that something went horribly wrong the first time), and ended up in New Jersey. The Devils have done pretty well over the years, with some championships to their credit.

Defunct teams like the Scouts are always a bit on the charming side. The players and coaches were on their last chance at glory in many cases, and in those days expansion teams usually were given a horrible hand to play. It's better now, thanks to free agency, but back then the established teams were not in a hurry to do any favors for newcomers.

Almost every team that's gone and not forgotten certainly deserves a book, and the Scouts are no exception. Author Troy Treasure came through in 2018 with a comprehensive look back called "Icing on the Plains." The subtitle is "The Rough Ride of Kansas City's NHL Scouts."  He sure got that part right.

The NHL had expanded from six to 12 teams in 1967, and then went to 14 (1970), 16 (1972) and 18 (1974). Throw in the WHA teams, and hockey players - especially decent ones - were in demand. In other words, there weren't enough good players to go around at that point. It's especially true if your team didn't have a great deal of money to throw around, and the Scouts certainly qualified. Kansas City put together something of a syndicate for ownership, but the franchise was unprepared for the six-figure contracts that started popping up. There wasn't that one guy who could sign a big check, or was prepared to lose a few million if that's what it took to get through the early years.

Meanwhile, Kansas City wasn't that big of a market in those days - heck, it still isn't in some ways. But the NBA and NHL arrived at the same time, and that meant the Scouts were at the end of the line for marketing dollars. Both basketball's Kings and hockey's Scouts didn't make it; in hindsight, you could see it coming.

But they had a little fun while it lasted. The Scouts had a veteran hockey man in Sid Abel as the general manager, and they had a coach in Bep Guidolin who had lost his job in Boston even though he had guided the Bruins to the NHL Finals in the spring of 1974. It wasn't a bad start, but they never had enough talent. The only two players that somewhat casual hockey fans might remember from the Scouts are Wilf Paiement and Denis Herron.

Treasure, a veteran sportswriter and announcer in the Midwest, must have spent a lot of time looking at websites and microfilm. After some introductory material, the author goes game by game through the two seasons. If you were lucky enough to see the Scouts during their brief run, you'll be able to find out what happen in that particular game - and maybe there will be a quote or two on the contest. Interjected along the way are short biographies of some of the principals. It's a little ping-pongy in format but does what is needed. The various other events associated with a sports team - trades, firings, ownership battles - are covered as well.

Treasure caught a break in that two of the main reporters of the Scouts' teams, Jay Greenberg and Steve Marantz, were very cooperative. Not only did they supply stories for the narrative, but they fired off copies of their files. It might be the best part of the book, because the two are something of an unbiased source of information on the team. Treasure also talked to about 10 of the players. It's interesting that a few people associated with the Scouts declined to be interviewed. Guess they are still sore for some reason more than 40 years later.

The book has a couple of flaws from the reader's perspective. The game descriptions tend to run together in short order. The Scouts did a lot of losing, and it's tough to bring life to that sort of story when told in such details. It's tough to know if there was a better way to tell about the two seasons; perhaps taking 25 pages out of the story might have helped. The book also contains no photographs. Old pictures can be expensive and/or difficult to find. No doubt Treasure gave it a try.

Even so, "Icing on the Plains" succeeds in its most obvious goal - telling the story of a sports team that never really had a chance at thriving. Those looking for information on the Scouts certainly will find the necessary facts here.

Be notified of new posts from this site on Twitter @WDX2BB.