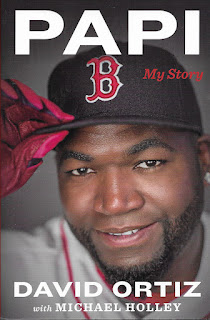 By David Ortiz with Michael Holley

It's time for another discussion about that literary phenomenon - the double autobiography. And the person in question is baseball standout David Ortiz.

Fans of the Boston Red Sox might remember the book, "Big Papi." The slugger came out with the story of his life in 2007. He was in the middle of his career then, a hero already because of his work in leading the Red Sox to the World Series title in 2004. You might have heard that it ended an 86-year "curse."

After that book was written, Ortiz went on to continue his exploits in Boston. He was a big part of two more World Champions, and eventually went past the 500-homer milestone. Ortiz retired after the 2016 season.

What happened next? He wrote another book.

For starters, it takes Ortiz and coauthor Michael Holley 114 pages to cover the years of his life through 2006. That's about half of the book. That particular fact might give you a little pause about reading this version. It's fair to say, though, that retirement freed Ortiz up to be a bit more candid about his entire baseball career. So from the perspective of more than 10 years later, this probably is the story that you want to read to get something of the inside scoop on his life. I say probably, because I'm not sure I read the first one.

Ortiz's story is relatively well-known among baseball fans. He signed with Seattle out of the Dominican Republic, and was traded to Minnesota. Ortiz did relatively well with the Twins when given a chance, but Minnesota opted not to sign him when he was finding his way through the majors. By the way, the reviews of the first book indicate that David didn't like Twins manager Tom Kelly in 2007, and he didn't change his mind a decade later. Ortiz signed with the Red Sox, eventually won a job, and was on his way to being arguably the best designated hitter in history.

The Red Sox went through a variety of ups and downs after 2004. What stands out here is that Ortiz is very loyal to his teammates, which is understandable. He was close to Manny Ramirez during their time together, even if Manny wasn't much easier to figure out if he was your friend. So when the Red Sox didn't try hard enough to keep established talent on the team - see Jon Lester - Ortiz was angry about it. He still is, years later. Such personalities as Theo Epstein and Ben Cherington take a hit along the way here, and not without some justification. Big Papi is still upset that Terry Francona pinch-hit for him with Mike Lowell way back around 2009. Ortiz has a long memory.

Number one on the hit list, though, is Bobby Valentine. He was the manager of the Red Sox for only a year, 2012. But Ortiz was convinced that the team was on the wrong track as soon as spring training ended. In fact, some veterans almost went to the team's ownership on the first road trip to ask for a switch in managers. The mutiny was delayed, but Valentine didn't last the year.

This is all told in a breezy way. Sometimes those who speak English as a second language can produce a book that's a little choppy, but Holley deserves credit for making it flow rather nicely.  By the way, the coauthor of the first book, Tony Massarotti, takes a hit along the way too. It comes with a description of what happened when Ortiz's name popped up on the Mitchell Report. By the way, there's not too much behind-the-scenes description of that episode, at least until the end when Ortiz finds out Major League Baseball isn't assuming he was on steroids in that era.

"Papi," then, should satisfy your curiosity about Ortiz and the Red Sox teams of his era. Just don't expect too much more than that.