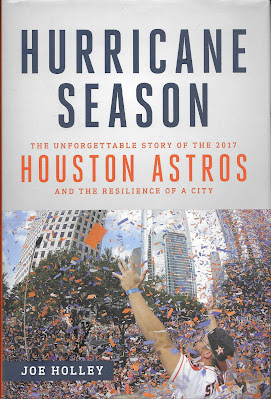 Here's a book that did not age well, even though it might have seemed like a reasonable idea at the time

It's called "Hurricane Season," and it's about the two big stories that took place in Houston in 2017. As you might recall, that was the year when the city and its surrounding area got clobbered by Hurricane Harvey. The storm left a few dozen trillions of gallons on the water, which in tern did hundreds of billions of dollars in damages.

If ever a city needed a small breath of hope under nearly impossible circumstances, Houston qualified. Therefore, the rise of the Astros baseball team certainly put a smile on the faces of the natives there. The Astros, who had been a bad team earlier in the decade, used a careful rebuilding plan that actually worked in a step-by-step manner. This was the year it paid off. Houston knocked off the Dodgers in seven games to win its first World Series and sparking the biggest sports celebration in the city's history.

Naturally, there were books to be written about all of this. Joe Holley got right to work. He was a general columnist for the Houston Chronicle in 2017. He didn't have much time to get everything done, but according to the book's last line he finished writing about 10 weeks after the end of Game Seven. After all, "Hurricane Season" had to be out to the public on May 1.

Holley mixes the hurricane story with the baseball events during the course of the 16 chapters. There is some jumping around here, but the tales of the storm probably works the best. Hurricanes tend to bring tragedy and heroism into the open, and Holley seems quite at home telling those stories from the days just before, during, and just after the actual deluge. If anything, more reporting on the cleanup later in the year would have been nice.

As for the baseball portions, Holley has a lot on his plate to cover. He reviews the history of the team, mostly on the ownership side. The author has to go through the 2017 regular season and the first two rounds of the playoffs, which featured wins over the Boston Red Sox and New York Yankees. Then there's the World Series itself. Holley goes through each of the seven games almost batter by batter, supplementing it with quotes from reporters and players. Oddly, the latter is probably the weakest part, because there's not a whole lot of new information there. It's almost like painting by numbers, baseball book version. There are some editing mistakes along the way connected to the baseball portions, which can happen under the circumstances.

Holley tells these stories in a less than objective way. There's an awful lot of sunshine spread here, particularly around the baseball team. It's easy to become tired of the references to how much Houston celebrates its diversity. Yes, it's a feel-good book for the readers, but often it's better to have others beside the author express those opinions along the way.

Even so, "Hurricane Season" apparently brought back plenty of good memories for the Astros' fans in Houston. The reviews on Amazon.com were amazingly enthusiastic. So give Holley credit for throwing a strike in that sense ... at the time.

But, reading the book in 2021 feels much different. Word eventually leaked out that the Astros had been cheating during the 2017 season, using trash can sounds to tip batters off about what was coming at home games. The general manager and manager were fired, and the bench coach - who had moved on to Boston to manage - was suspended. The Astros have had a target on their backs ever since the story went public; don't expect people in New York and Los Angeles to forgive those involved any time soon.

It's difficult to read this book now without having a little sadness about what happened. Maybe that's why I found up a copy in the Dollar Store. Its upbeat tone feels a little out of place now. "Hurricane Season" may bring back some good memories for Astros' fans, but certainly others might not think of it so kindly.