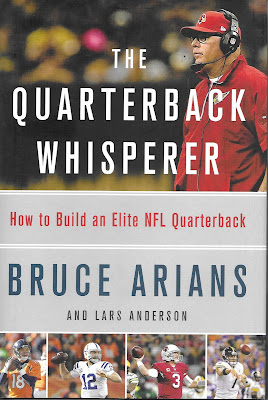 By Bruce Arians and Lars Anderson

This obviously is the right time to read a book by Bruce Arians - even a relatively old one.

Arians is the coach of the Tampa Bay Buccaneers. He was a little overshadowed by his quarterback after that team won the Super Bowl in early February of this year.

Still, there was a line in the book that will make those who watched the game immediately recognize his offensive philosophy at work. Arians talks often about not being afraid of trying to put the game completely away when he has the chance.

Sure enough, late in the Super Bowl when the Bucs apparently safely ahead, Tom Brady launched a long pass - when a short, safe one or a run might have expended more time on the clock. Arians believes in being aggressive, and his quarterbacks, apparently, have loved every down of it.

Brady isn't the only good quarterback he's had over the years in his long football life. Arians also has coached such players as Peyton Manning, Andrew Luck, Carson Palmer and Ben Roethlisberger. The coach teamed up with writer Lars Anderson to come up with "The Quarterback Whisperer."

The book is an interesting way to tell a life story. Arians probably was looking at a career in a factory when he grew up in York, Pennsylvania, when he found football - and loved it. He played at Virginia Tech, and soon moved on to the coaching business. If you know anything about the sport, you realize that coaches are the big reason why moving vans can be profitable. If you are moving up the ladder, you often have to change jobs to do so. When you get to the next job, sometimes you lose it for reasons other than your performance - and it's time to move again. Few stay in one city for long unless they find a head coaching job that allows them to be successful. Arians was simply happy to work long enough to qualify for an NFL retirement package.

Good fortune smiled on him when he landed a job on the staff of Bear Bryant at Alabama in 1981, as the legendary coach was winding down his great career. Arians offers the best quick explanation as to why the Bear ranks as one of the best ever in that profession. Bryant was a master at dealing with people, and motivating them. Then it was on to the pros.

Manning, Luck, Palmer and Roethlisberger get their own chapters here, and they serve as the backdrop for Arians' recaps of his time with each player and team. From the coach's standpoint, the four have more in common than you might think. They all had physical tools, of course, but they also were all smart and all willing to work extremely hard in order to give their teams the best chance at winning. The mental gymnastics required to be a pro quarterback are close to mind-boggling, as Arians nicely outlines what goes into it.

This is not a particularly lengthy book (about 240 pages); you can get through it in a day if you have a little time to do so. It doesn't follow a strict chronology, which may bother some while others may think it's conversational in nature and thus can bounce around a bit without harm. The book also is not too technical. My guess is that anyone who watches NFL games regularly ought to be able to follow what is described in the pages. The veteran coach has some good stories from his football days that are good fun to read.

"The Quarterback Whisperer" still holds up pretty well, even a few years from publication date. The only catch is that Arians describes Arizona as his last job in football. He retired from the Cardinals after the 2017 season, but couldn't resist an offer from Tampa Bay to come back in 2019. As we know ow, that decision provided the highlight of his football life. Maybe he'll be tempted to write a sequel about coaching Brady and a Super Bowl champion. In the meantime, the book will make you feel that the championship ring is a good reward for this interesting character.