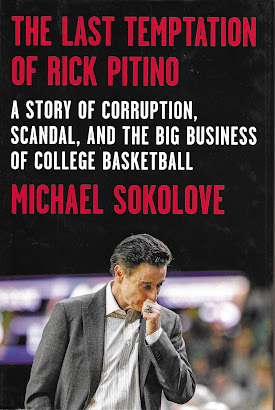 If you follow college basketball in particular or even sports in general, you probably heard about the FBI probe into recruiting in that particular sport in 2017. A variety of criminal actions were uncovered by the FBI in a good-sized probe. It seems that there's a very tangled web in the underbelly of the sport, which connects players, coaches, agents, shoe companies, and go-betweens. It's fair to say it's all something of a mess.

"The Last Temptation of Rick Pitino" is essentially a first draft of the story of that scandal; we'll need to wait a while longer than two years before all of the details are sorted out. In particular, author Michael Sokolove focuses in on the University of Louisville as symptomatic of the entire situation.

The launching point from the Cardinals' standpoint was the arrival of a recruit named Brian Bowen Jr. It was something of a surprise when he announced he'd be going to Louisville. He wasn't believed to be on the team's recruiting list. Then-coach Rick Pitino said at the time of his signing, "In my 40 years of coaching, this is the luckiest I've ever been."

Then word came out that money apparently had gone from a shoe company, Adidas, to Bowen's family through intermediaries. Bowen himself denied any knowledge of the payments, which actually isn't that improbable in this particular world. Even so, he was the one who was barred from playing for Louisville; he eventually transferred to South Carolina. Bowen wound up in Australia and was not drafted by an NBA team in 2019.

Perhaps we shouldn't have been surprised that Louisville was part of this. The school has invested heavily in athletics in recent years to build up its reputation, paying some of the largest salaries to coaches in the country and spending more money on relatively lavish facilities. Athletic director Tom Jurich was good at fundraising and at building up the athletic program. He courted donors and spared no expense at achieving excellence. The problem was that the money had to come from somewhere, and the easiest place was the school's endowment - which took major hits during the 2010s. The story of Louisville athletics, with a complicated town/gown relationship, is the best part of the book.

The book mentions famous basketball coach Rick Pitino in the title, but that's a little misleading (someone probably thought it was cute). Pitino was the highest paid college basketball coach in the country and won a lot of games there. Even so, he already had a couple of strikes against him when the Bowen story broke. Pitino was involved in a short sexual relationship that led to an extortion attempt, which was messy for all concerned. Then came word about strippers "entertaining" recruits during school visits, followed by the Bowen situation. Pitino has claimed he didn't know anything about it and that certainly could be true. He also knows that there was plenty of pressure on everyone at Louisville to win, and that he was paid enough to try to guarantee that no corners would be cut.

Sokolove does spent some time looking at the big picture, but doesn't see many easy ways out. The top level of college sports does generate a tremendous amount of money, but the players only see a scholarship - a not-incident benefit at most schools, but not for big-time football and basketball. Pitino was earning $7.8 million at the end of his run. You could argue that no college coach deserves that money. You could also argue that a college coach of a big program fills seats and sells television deals, and that a good one is worth it and then some to the school. Paying the athletes directly is a solution, but the details are rather miserable to consider. Do top players get more than others? Is there a bidding war for talent? Do scholarship athletes in the so-called minor sports get something too? It's a mess.

"The Last Temptation of Rick Pitino" isn't exactly beach reading. Some of the tales of investigations and regulations can't help but be dry. Still, it will make the reader consider what's happening in college sports. In a world where many college students aren't allowed to gather for classes but apparently can get together to play football this fall, we probably can use a little thought right now.